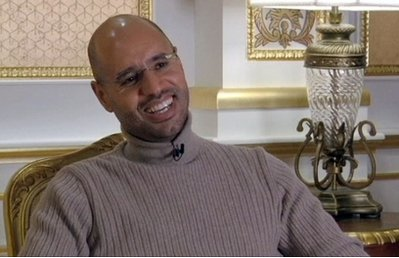 A son of Libya Moammar Gadhafi on Friday said his family was "not afraid" after the United Nations approved air strikes against forces loyal to his father's regime.

"We are in our country and with our people. And we are not afraid," Seif al-Islam Gadhafi told ABC News Nightline from the Libyan capital Tripoli.

The U.N. Security Council on Thursday approved military action to halt the Gadhafi regime's assault on rebels, clearing the way for air strikes, with the first bombing raids possible within hours.

Seif said the resolution was "unfair" and denied widespread reports that his father's troops were killing civilians as they sought to wrest back cities seized by rebels in recent weeks.

"It was unfair because, as you know, from the beginning we told to everybody there were no air strikes against civilians, no bombing of civilian districts or demonstrations."

"Have we seen a single civilian casualty? Even the terrorists or the armed people, they just surrender. So there was no bloodshed in Libya."

He also indicated that one of four New York Times reporters who went missing earlier this week while reporting on heavy fighting in eastern Libya had been arrested and would be released soon.

"They entered the country illegally and when the army, when they liberated the city of Ajdabiya from the terrorists... they found her there," he said.

"They arrest her... But then they were happy because they found out she is American, not European. And thanks to that she will be free tomorrow," he said.

He did not give the journalist's name, and it was not clear whether he was referring to photographer Lynsey Addario, one of the four reporters who went missing near the town of Ajdabiya.

He also said her fate was "not my decision."

Seif claimed that Libyans were more favorably disposed towards Americans than Europeans or Arabs because Washington had initially held off from calling for military intervention.

The New York Times said on Thursday it had nothing new to report on the fate of the journalists, but had received unconfirmed "second-hand reports" that they had been "swept up by Libyan government forces."

The missing journalists include Anthony Shadid, a two-time winner of the Pulitzer Prize, the most prestigious U.S. journalism award.

The others are Stephen Farrell, a reporter and videographer who was kidnapped by the Taliban in 2009 and rescued by British forces, and Tyler Hicks, a photographer with extensive experience in the Middle East and Africa.