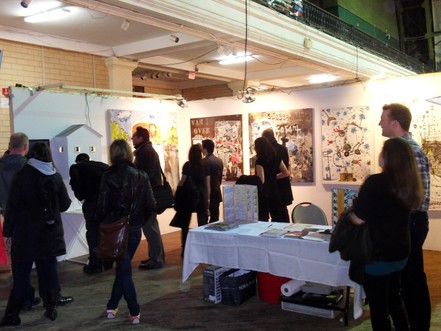 Documenta, one of the world's biggest contemporary art fairs, will open to the public Saturday in this central German city, accompanied by events in Afghanistan, Egypt and Canada.

The 13th edition of the event, held every five years, will present the work of nearly 300 people from around 55 countries -- only about half of them "artists" in the conventional sense, organizers said.

President Joachim Gauck will kick off the "global art show" in Kassel, a 100-day-long exhibition and opportunity to discuss painting, photography, films and world affairs. Around 750,000 visitors are expected.

Although nearly all the works shown are by living artists and intellectuals, Documenta will also show paintings by the late Salvador Dali and even computer inventor Konrad Zuse.

Other participants include Germany's Rosemarie Trockel, who erected a "House for Pigs and People" at the 1997 edition, and South African painter and film-maker William Kentridge.

China's Song Dong will unveil a garbage heap that has already been completely colonized by freshly grown grass while Frenchman Pierre Huyghe will be showing off a compost heap.

An ambitious plan to display El Chaco, the world's second heaviest meteorite weighing in at 37 tons, was eventually abandoned. Instead, the attempt will be documented.

"What these participants do and what they exhibit at Documenta may or not be art," the event's U.S.-born artistic director, Carolyn Christov-Bakargiev, told reporters.

"The boundary between what is art and what is not has become less important."

She said the work on display reflected a world in constant turmoil.

"It looks at moments of trauma, at turning points, accidents, catastrophes, crises," Christov-Bakargiev said, adding that the motto of "collapse and recovery" also applied to most of the presentations.

But she said that those themes only became recognizable as the show came together, insisting she had "no concept".

Events will take place at local museums, a park, cinemas and a rail station and, for the first time, in parallel events in Kabul, Cairo and Canada's Banff National Park.

The Afghan capital will also host an exhibition and a film series and part of a photo collage whose second half can be seen in Kassel.

You are so interesting! I don’t believe I’ve read anything like this before. So good to find another person with a few genuine thoughts on this subject. Really.. thanks for starting this up. This site is one thing that is needed on the internet, someone with a bit of originality!