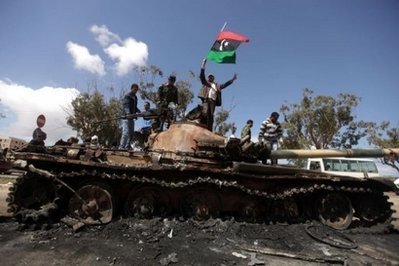 Libyan government forces pulled back 100 kilometers from rebel-held Benghazi but showed they still had plenty of fight on Monday as they easily beat off a rebel advance.

The forces loyal to Libyan leader Moammar Gadhafi had retreated overnight to the key town of Ajdabiya, south of the city of Benghazi, after Western-led air strikes destroyed much of their armor, leaving dozens of wrecked tanks along the road.

But as rebels who massed in their hundreds outside Ajdabiya advanced towards their position, the government troops opened fire with artillery and remaining tanks, sending the insurgent forces fleeing.

The rebels began advancing south from their position about five to 10 kilometers from Ajdabiya after hearing the sound of planes overhead.

"These are Sarkozy's planes," they shouted, referring to French President Nicolas Sarkozy, who led an effort to convince the international community to enforce a no-fly zone over Libya.

The rebels moved forward with Katyusha rockets and 12.7 mm anti-aircraft guns mounted on trucks, racing south on the desert road towards Ajdabiya,

But they quickly came under fire, with dozens of artillery rounds forcing the convoy of vehicles to screech to a halt, before swiftly retreating north.

The cars sped away as the shells hit the sand dunes along the right side of the road, sending sand into the air and clouding the view of drivers desperately trying to navigate their way out of the battle.

An Agence France Presse photographer saw at least two people who appeared to be dead, and another three with serious injuries who were being loaded into trucks by rebel fighters. Several vehicles, including an ambulance, were damaged by the attack.

Gadhafi's forces captured Ajdabiya last week on their drive eastward against the month-old uprising and launched a fierce attack on Benghazi.

But they were halted when French aircraft carried out airstrikes, soon after U.N. Security Council Resolution 1973 authorized all necessary measures to prevent harm to civilians.

The rebels have welcomed the airstrikes, pledging they would be able to push Gadhafi's forces back if a no-fly zone was imposed.

But the lightly-armed insurgent force arrayed near Adjabiya on Monday displayed no apparent offensive or defensive capacity.

Captured government tanks and other heavy weaponry which the rebels had paraded in Benghazi on Sunday were nowhere in sight.

Naim Ibrahim Abdul Qader, a philosophy student at Benghazi's Qar Younis university, was among the fighters attempting to advance towards Adjabiya.

He wept as he described his reluctance to fight.

Coalition officials said Sunday that a no-fly zone was effectively in place over the country, and rebel forces now assume that any aircraft is friendly.

In Al-Wayfiya, 35 kilometers south of Benghazi, the aftermath of coalition air strikes on Sunday and Saturday -- burned out trucks, scorched tanks and craters in the ground -- became an attraction for curious residents.

They clambered on top of the metal skeletons of the vehicles, taking pictures and expressing delight at international intervention.

"This is what we need ... these were going to kill people," said Ali Mohamed, a Benghazi resident, gesturing towards the field full of destroyed tanks.