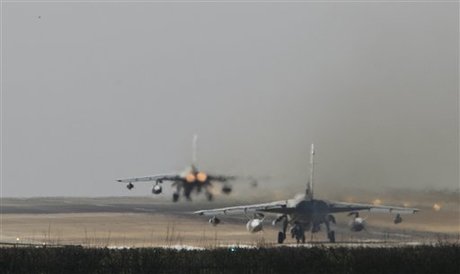 Coalition forces bombarded Libya for a third straight night Monday, targeting the air defenses and forces of Libyan ruler Moammar Gadhafi, stopping his advances and handing some momentum back to the rebels, who were on the verge of defeat just last week.

But the rebellion's more organized military units still were not ready, and the opposition disarray underscored U.S. warnings that a long stalemate could emerge.

The air campaign by U.S. and European militaries has unquestionably rearranged the map in Libya and rescued rebels from the immediate threat they faced only days ago of being crushed under a powerful advance by Gadhafi's forces. The first round of airstrikes smashed a column of regime tanks that had been moving on the rebel capital of Benghazi in the east.

Monday night, Libyan state television said a new round of strikes had begun in the capital, Tripoli, marking the third night of bombardment. But while the airstrikes can stop Gadhafi's troops from attacking rebel cities — in line with the U.N. mandate to protect civilians — the United States, at least, appeared deeply reluctant to go beyond that toward actively helping the rebel cause to oust the Libyan leader.

President Barack Obama said Monday that 'it is U.S. policy that Gadhafi has to go.' But, he said, the international air campaign has a more limited goal, to protect civilians.

'Our military action is in support of an international mandate from the Security Council that specifically focuses on the humanitarian threat posed by Colonel Gadhafi to his people. Not only was he carrying out murders of civilians but he threatened more,' the president said on a visit to Chile.

Among the rebels, as well, there was a realization that fighting could be drawn out. Mohammed Abdul-Mullah, a 38-year-old civil engineer from Benghazi who was fighting with the rebel force, said government troops stopped all resistance after the international campaign began.

Disorganization among the rebels also could hamper their attempts to exploit the turn of events. Since the uprising began, the opposition has been made up of disparate groups even as it took control of the entire east of the country.

Regular citizens — residents of the 'liberated' areas — took up arms and formed a ragtag, highly enthusiastic but highly undisciplined force that in the past weeks has charged ahead to fight Gadhafi forces, only to be beaten back by superior firepower. Regular army units that joined the rebellion have proven stronger, more organized fighters, but only a few units have joined the battles while many have stayed behind as officers struggle to get together often antiquated, limited equipment and form a coordinated force.

Meanwhile, a 'political leadership' has formed, made up of former members of Gadhafi's regime who defected along with prominent local figures in the east, such as lawyers and doctors. The impromptu nature of their leadership has left some in the West — particularly in the United States — unclear on who the rebels are that the international campaign is protecting.

The disarray among the opposition was on display Monday.

With Benghazi relieved, several hundred of the 'citizen fighters' barreled to the west, vowing to break a siege on the city of Ajdabiya by Gadhafi forces, which have been pounding a rebel force holed up inside the city since before the allied air campaign began. The fighters pushed without resistance down the highway from Benghazi — littered with the burned-out husks of Gadhafi's tanks and armored personnel carriers hit in the airstrikes — until they reached the outskirts of Ajdabiya.

Along the way, they swept into the nearby oil port of Zwitina, just northeast of Ajdabiya, which also was the scene of heavy fighting last week — though now had been abandoned by regime forces. There, a power station hit by shelling on Thursday still was burning, it’s blackened fuel tank crumpled, with flames and black smoke pouring out.