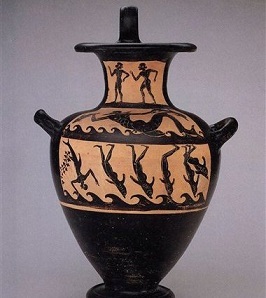 The Toledo Museum of Art says it will return an ancient water jug to Italy that investigators believe was probably illegally dug up from that country years ago.

The 2,500-year-old water vessel, or kalpis, has been on display at the Ohio museum since 1982, when it was purchased from an antiquities dealer out of Switzerland. It will be displayed in the museum's Libbey Court until it leaves for Rome, probably in late summer.

"The right thing to do is to return this object," museum Director Brian Kennedy told The Blade newspaper. "We knew we'd likely lose this. We'll miss it."

Italy has pressed an aggressive campaign to win back ancient Roman, Greek and Etruscan vases, bowls, statues and other artifacts prosecutors contend were looted from the country. The campaign was set in motion after a police raid on a Swiss warehouse of an Italian art dealer found a trove of artifacts and photos of antiquities, many of them still covered with dirt from being hastily excavated by antiquities hunters in Italy.

Black painting on the orangey clay vessel at the Toledo museum depicts the Greek tale of Dionysos, the god of wine and drama. The late museum curator Kurt Luckner had recommended Toledo buy the kalpis for $90,000, and its acquisition was a coup for Toledo because the Metropolitan Museum of Art in New York had also wanted it at the time.

Authorities believe the 20-inch (50-centimeter) artifact was probably illegally excavated in Italy, smuggled to Switzerland and given a forged record of ownership. To clear the way for its return to Italy, federal prosecutors filed a complaint Wednesday in U.S. District Court asking a judge to order the jug forfeited.

Last year, a mermaid holding a candy dish, the Nereid Sweetmeat Stand, was returned by the Toledo museum to the Dresden Museum in Germany. Made in the mid-1700s, it had been stolen during World War II. New X-rays of the porcelain piece showed fine cracks that matched photographs taken in the 1930s when it was still in Germany.