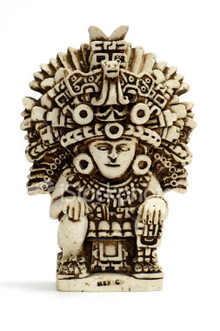 A Mayan statue that sold for the record price of nearly three million Euros ($4.2 million) at a Paris auction this week is a fake, the Mexican government said Tuesday.

"The piece... is a fabrication, because it belongs to none of the pre-Hispanic cultures in Mexico," the foreign ministry and the National Institute of Anthropology and History (INAH) said in a joint statement.

It said INAH experts had determined it was a fake because it did not match the style of the period it was supposedly from, and that the Mexican embassy had informed French authorities.

The 165.5-centimeter (5.4-foot) god, with legs slightly bent and wearing sandals with long leather straps, was said to be from the Maya late classical period (550-950 AD).

The piece was part of a private collection of some 200 sculptures belonging to Swiss industrialist Henry Law.

The piece sold for 2,912,000 euros, the highest amount ever paid for an item of its kind, by an anonymous European buyer.

It was the most expensive item at the auction, which fetched a total of 7,4 million euros, according to a statement from the Drouot auction house.