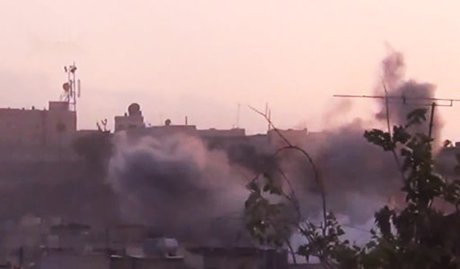 An attack on a pro-government television near Damascus killed seven staff Wednesday, state media said, while 29 people died in other violence on the heels of the "bloodiest week" of the 15-month uprising, according to a watchdog.

"The terrorist groups stormed the offices of Al-Ikhbariya, planted explosives in the studios and blew them up along with the equipment," Information Minister Omran al-Zohbi told state television in a live interview.

"They carried out the worst massacre against the media, executing journalists and security staff," Zohbi said, adding that a number of staff were kidnapped.

Press watchdog Reporters Without Borders called for members of a U.N. observer mission, which suspended its operations on June 16 in the face of worsening violence, to visit the scene to ascertain the facts.

"News organizations should not be used as targets by the parties to the conflict," the watchdog said.

"However, we deplore in the strongest possible terms the broadcast by the media of messages inciting hatred and violence against civilians."

In other violence on Wednesday, 10 soldiers were killed before dawn in the eastern province of Deir Ezzor, while 15 troops defected to the rebels, the Syrian Observatory for Human Rights said.

Five people were killed in shelling and shooting in the Damascus suburb of Douma and surrounding areas, while regime forces carried out raids and arrests elsewhere in the province.

The central city of Homs was exposed to heavy shelling by regime forces where "living conditions remain difficult because of the blockade and bombardment, which has continued for weeks", the Observatory said.

In the northwestern province of Idlib, clashes and shelling left six civilians and three rebels dead, in addition to five soldiers, among them a colonel of the elite Republican Guard.

More than 15,800 people have been killed since the outbreak of the revolt against President Bashar Assad's regime in March last year, the Observatory said, adding that the seven days to Tuesday were the bloodiest so far.

"The pace of the killings has escalated," the watchdog said.

"The last week was the bloodiest week of the Syrian Revolution," Observatory director Rami Abdel Rahman told Agence France Presse by telephone, adding that 916 people were killed from June 20 through 26.

Of those, roughly a quarter -- 1,197 -- have been killed since the U.N. observer mission intended to oversee the peace plan suspended its operations in the face of the mounting violence.

"The last month, from May 26 to June 26, was the deadliest since the start of the protests. During this period, 3,426 people were killed," Abdel Rahman said.