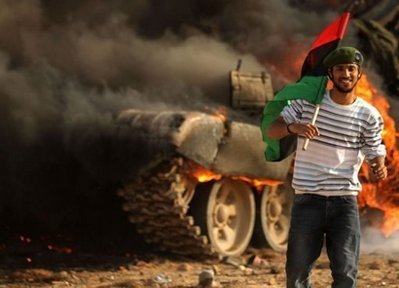 The latest blasts followed two explosions on Sunday evening in the city, blamed by Libyan state television on an air raid by coalition forces.

Sirte, 360 kilometers east of Tripoli, is the next target of pro-democracy rebels as they push towards the capital from their eastern bastion Benghazi.

The streets of Sirte early on Monday morning were quiet and deserted, and it was not immediately possible to establish if the overnight bombings caused any damage.

An AFP reporter is part of a group of journalists invited by the Libyan regime to tour the city.

The explosions shattered the calm intermittently between 0420 GMT and 0435 GMT as warplanes flew overhead, indicating they were caused by coalition air strikes.

A dozen cars were seen heading towards Tripoli, filled with women and children fearing coalition air strikes and the advancing rebel fighters, who have been pushing Gadhafi's forces back along the main coastal road.

The rebels' pursuit of Gadhafi forces saw them wrest back control of key oil town Ras Lanuf and press on as far as Nofilia with Sirte firmly in their sights 100 kilometers the road where the next major battle was expected.