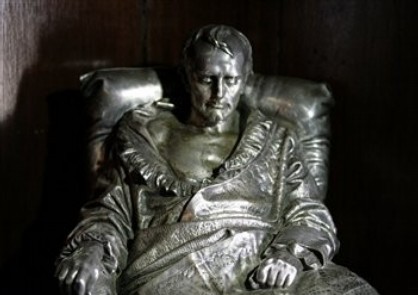 Napoleon Bonaparte goes on display in Cuba Friday with the reopening of the Napoleonic Museum of Havana, which boasts the largest collection of French revolutionary and imperial items outside of Europe.

Napoleon never set foot in Cuba but his physician, Corsican-born Francesco Antommarchi, who treated him during his last days in exile on Saint Helen, moved here after the emperor died in 1821, bringing with him the French icon's death mask.

The death mask is the centerpiece of the museum, which after a three-year renovation now includes some 8,000 French Revolutionary and Imperial artifacts and takes up four floors of an ornate Renaissance-style Havana palace.

The museum is "a contribution towards the study of an event of universal relevance that concerns many people, including those in Latin America," said Havana historian Eusebio Leal at the museum inauguration ceremony.

"This is not a monument glorifying conquest or the cult of militarism," he added.

The collection includes paintings, statues, clothing and weapons from the era, and a library of some 5,000 books relating to the period in French, Spanish and English.

It also includes a gold watch the descendents of Antommarchi gave President Raul Castro in the 1960s, at a time when Julio Lobo, a wealthy businessman and fervent Napoleon admirer, collected most of the items.

French ambassador Jean Mendelson was at the inaugural event along with Alix de Foresta, 84, the widow of a descendant of Napoleon's youngest brother Jerome.

The representative of the Bonapartes, who had visited Cuba in 1951 with her husband, was thrilled by the ceremony and donated a porcelain dinner service to the museum.

In his opening presentation historian Leal mentioned Francisco de Miranda and Simon Bolivar, South American leaders in the early 19th century wars of independence against Spain, who were strongly influenced by the French Revolution.

Miranda actively participated in the French Revolution, rising to the rank of general, and his name is engraved on the Arc de Triomphe in Paris.