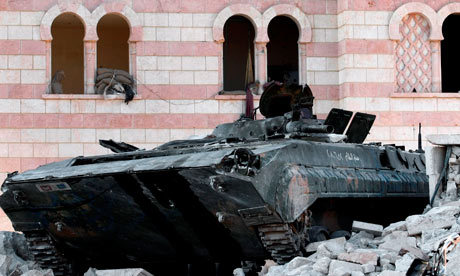 Syrian rebels staved off a fightback by regime forces in Aleppo on Saturday amid growing concern about the risks of reprisals against civilians in the country's commercial capital.

After massing for two days, troops backed by tanks and helicopter gunships moved on southwestern Aleppo where rebels concentrated their forces when they seized much of the northern city on July 20.

At least 29 people were killed, the Syrian Observatory for Human Rights said, contributing to a figure of around 140 nationwide.

The watchdog said more than 20,000 people, mostly civilians, have now died since the uprising against President Bashar Assad's regime erupted in March 2011.

"It started at 4:00 am (1:00 GMT) and eight hours later it's still hell. This is madness," an Agence France Presse correspondent reported from the Aleppo district of Salaheddin.

Civilians crowded into basements seeking refuge from the bombing, with the Observatory's Rami Abdel Rahman describing the clashes as the uprising's "fiercest."

"There are thousands of people in the streets fleeing the bombardment. They're being terrorized by helicopter gunships flying at low altitude," said an activist, adding many had taken refuge in public parks.

It said two "terrorists" had been killed and three others captured, and their arms and vehicles seized.

Colonel Abdel Jabbar al-Oqaidi of the rebel Free Syrian Army said his forces had repulsed troops in Salaheddin and that the regime offensive had been stopped.

"We managed to force the army to the neighborhood of Hamdaniyeh," he told AFP on the phone, adding that while the army had been halted on the ground, artillery and gunships continued to pound the city.

Abdel Rahman said the fact the soldiers had been stopped in Salaheddin "does not necessarily mean a withdrawal as their strategy is to bombard ... to cause an exodus then launch an assault even more fierce."

An AFP correspondent said rebels were poised to launch a final raid on a strategic police post in the city center, where 100 men armed with Kalashnikovs have been holding out for three days.

Its capture would open a corridor between Salaheddin and the rebel-held district of Sakhur, some six kilometers to the northeast.

the syrian regime is up for a major surprise the upcoming days....

The rebels are at a clear disadvantage militarily.... they are under equipped and lack offensive weapons and high tech equipment. It will be a tough fight though. The world is watching a new massacre of a massive scale being committed.

This massacre will be Bashar's masterpiece. He knows well, no one will interfere

When Assad's thugs kill 19000 Syrian civilians, nobody says a word, yet when Israel injures just a single Palestinian, the whole world shouts out against them. Where is the world decency and honesty?

after aleppo battle it will be the division of syria, everybody has advantages in it, alawi state .. kurd ... sunnis and druze.
the russians will have a foothold on the mediterrenean
the iranian too..it will not be a complete loss after 35 years of political and hizb investment for the farsis
the israelis are sure to be happy,its like the renewal of another 40 years lease for the golan
the kurds are having their autonomy in hassaka and kamichli and soon will join the kurdish region of irak...
the wahabies are doing their job in irak through the sunni region of anbar especially after bandar is in his new post at the saudi moukhabarat....
the american are happy if natanyahu is ....and the russians contained

This is simply a disaster of major proportions for the civilians of Aleppo. It is useless and senseless killing of innocents. Assad will not be able to save his regime even if he kills everyone in Aleppo, for by killing them, he loses his mantle of authority to govern. What is gained here? Nothing, other than exacting retribution against the Regime Opponents, and even that is a loss. For every person Assad's forces kill, the Regime earns for itself 10 more persons to oppose it with their blood.

Most of the people of Aleppo (who are Sunnis) do not support the rebels. The rebels are from the countryside and the city inhabitants (especially the Christians) are terrified and do not want them.

jabalm a true NAWARI. the swears that you use in here go use them at al manar or tayyar's site. 3aib 3aleyk. sometimes my kids are next to me while i'm reading this have some deasency. i wonder if tyou have any kids & you use this profane language in front of them. I feel sorry for them

I have a few syrian friends they really like Bashar they said he has done a lot of good things for that country as brought them a little more to civilisation. He is bearing the consequences of his late father. But them too think that he will loose power sooner or later & he will deferred to ICC in Hague.

thank you for that update Sergio

The Anti Syrian regime media is not mentioning that These sectarian killers are massacring Christians and Alewites every time they enter Christian and Alewite neighborhoods.

Let this battle play out, there are apparently a lot of foreign mujahideen fighters based in Aleppo. Better if the world sits back and does not interfere. Bashar will inevitably lose, likely face a grizzly death by beheading, but give him time to take some bad guys with him to hell.

Unfortunately he is not taking only the mercenary mujahideen. He is taking innocent syrian civilians with their wives and their children.

I wish I can be optimistic about the current situation and the path of the Syrian revolution, but I am not. I wish I could say that the Free Syrian Army has a chance of fending off and inflicting a defeat on the Assad gangs, but it does not.

The way I see it is Assad and his gangs are getting back on the winning side. Thanks to the extreme western silence and lack of support for the FSA. While Assad is receiving massive military assistance from Russia, Iran and Hizbullah, FSA is only receiving light weaponry and some strategic advise from Turkey, KSA, and Qatar and they are only being provided with light blackmarket weapons (they are not allowed to provide them US/Western made weapons) with nothing able to fend off the fierce power the Assad Air force is showing.

So until Mr. Obama and the Western world grow a conscious and stop hiding behind words like "spilling oil on fire" and understand that they are only helping unarmed civilians defend themselves against a brutal sadistic regime and start providing them real support... It deeply saddens me to say this is a lost cause... The US (Obama) and the Western world will be as much as Russia/China held responsible for their inactions.

What's the future for the Alawi after Assad? He really dosen't care about them either.