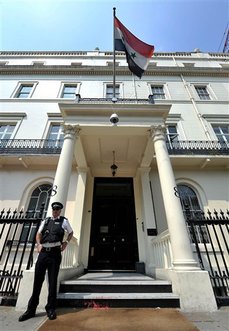 The move comes after a series of defections by senior Syrian officials in recent weeks, including diplomats in several countries and top army officers.

The Foreign Office said in a statement that charge d'affaires Khaled al-Ayoubi had informed it on Monday that he had "left his post", describing it as a blow to the Syrian government.

"Mr. al-Ayoubi has told us that he is no longer willing to represent a regime that has committed such violent and oppressive acts against its own people, and is therefore unable to continue in his position," it said.

Britain expelled the previous Syrian charge d'affaires, Ghassan Dalla, and two other diplomats in May. Syria had earlier withdrawn its ambassador from London.

"Mr. al-Ayoubi was the most senior Syrian diplomat serving in London. His departure is another blow to the Assad regime," the Foreign Office said.

"It illustrates the revulsion and despair the regime's actions are provoking amongst Syrians from all walks of life, inside the country and abroad."

It added: "We urge others around Bashar Assad to follow Mr. al-Ayoubi's example; to disassociate themselves from the crimes being committed against the Syrian people and to support a peaceful and free future for Syria."

The Foreign Office said Ayoubi was not speaking to the media and asked for his privacy to be respected.

It said he joined the Syrian diplomatic service in 2001, and that his first posting was in Greece as consul from 2003 to 2008.

A Foreign Office spokesman would not confirm Ayoubi's current whereabouts or say whether he was now seeking asylum in Britain.

Defections are becoming a growing problem for Assad's regime, which has launched a bloody crackdown on a revolt in which more than 20,000 people have died since March 2011, according to activists.

Syria closed its embassy in Australia on Monday amid reports that some of its staff were seeking asylum.

Mayer Dabbagh, Syria's honorary consul in Sydney, confirmed the closure but declined to say why the embassy had shut or what had become of its staff.

Also on Monday a diplomatic source said that another brigadier general had defected from Syria's army to join the ranks of opposition fighters, pushing the total number of rebel generals based in Turkey to 28.

Senior Syrian officers have been crossing over into Turkey to link up with rebel forces on a near daily basis in recent months, often accompanied by rank-and-file troops, to join the ranks of the Free Syrian Army.

There have been a number of defections by diplomats too.

Sources said last week that Syria's charge d'affairs in Cyprus, Lamia Hariri, and her husband Abdel Latif al-Dabbagh, the ambassador to the United Arab Emirates, had both defected.

As a matter of fact, these diplomats are useless. It is better for them to resign or defect.

When you say "as a matter of fact", you need to support your statement with evidence or proof of said fact.

I just can't understand why all the countries which are coming out against the Assad regime don't simply tell all the Syrian diplomats remaining in their countries to pack up and bugger off home.