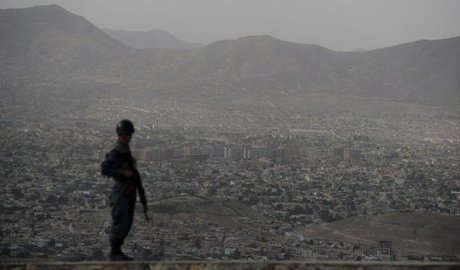 Afghan officials said Thursday that five insurgents linked to the Haqqani network were killed in a pre-dawn gunbattle, claiming to have foiled a major attack on an area of Kabul home to Western embassies.

The militants -- who also had all-enveloping burqas to disguise themselves as women -- had planned to seize a tall building from which to fire on their targets, he said.

The scale of the preparations and the targets, as unveiled by Afghan officials, suggest an attempt at an assault along the lines of the biggest coordinated attack on the capital in 10 years of war, which occurred on April 15 this year.

Then, three squads of suicide attackers -- described later by Western officials as members of the al-Qaida-linked Haqqani network -- took up positions in high buildings and fired on government offices, embassies and military bases.

Acting on intelligence reports Thursday, security forces raided a house in the eastern Pul-e-Charkhi neighborhood and a gunfight erupted after the militants refused to surrender, Mashal said.

"The gunfight lasted for six hours and a total of five insurgents were killed," Mashal said.

Foreign ministry spokesman Sediq Sediqqi confirmed the death toll was five and added that "all indications and evidence shows they were linked to Haqqani".

The Haqqani network is a faction of the Afghan Taliban whose leaders are based in neighboring Pakistan, where Islamabad has come under immense U.S. pressure to wage an offensive against the group.

The U.S. Senate last week passed a resolution urging the State Department to put the Haqqani network -- accused of a series of spectacular commando-style raids in Kabul -- on the U.S. list of terrorist groups.

U.S. and Afghan officials say the network commands the support of Pakistan's intelligence agency, the ISI.

The NATO commander in Afghanistan, U.S. General John Allen, held talks in Islamabad Thursday with Pakistan's army chief, General Ashfaq Kayani, and said later that "significant progress" was being made in improving cooperation.

No reference was made to the Haqqani network.

The alleged attack was foiled in the capital after NATO reported an escalation in insurgent attacks in recent months, and amid growing unrest in areas neighbouring Kabul.

NATO's International Security Assistance Force (ISAF) said last week that attacks in the second quarter of this year were 11 percent higher than in the same period last year.

The month of June alone saw the highest number of attacks in nearly two years, with more than 100 assaults a day across the country, including firefights and roadside bombings, the U.S.-led coalition said.

In the latest attack, on Thursday, two NATO soldiers were killed by a roadside bomb in southern Afghanistan, ISAF said.

NATO has 130,000 troops helping the government of President Hamid Karzai fight a 10-year insurgency waged by the Taliban since the hardline Islamists were toppled from power in a U.S.-led invasion in 2001.

But the international troops are scheduled to pull out of Afghanistan by the end of 2014, handing responsibility for security to government forces.