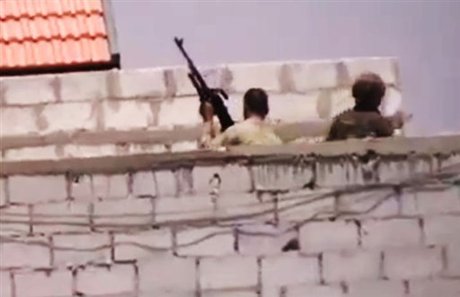 "We had already attacked the airport several times, but this was the first time we used heavy weapons," which were "four tanks taken from Anadan," rebel commander Abdel Aziz Salameh told Agence France Presse, referring to a strategic military checkpoint outside Aleppo that the rebels captured on Monday.

"The destruction was greater than the time before," he added.

An Agence France Presse reporter who heard and saw the bombardment said rebels told him it was "an attack to take this airport being used by helicopters and planes that are firing on Aleppo."

The rebel Free Syrian Army has said it now controls "50 percent" of Aleppo, where the army is bombarding rebel-held areas, notably Salaheddin in the southwest, but has yet to advance on the ground.

Questioned about the lack of retaliation by the army, which is massed around Aleppo, a security source said that "the regime is testing the terrorists' defenses in order to uncover their hiding places before annihilating them in a major surgical operation."

Mobile phone and Internet services, cut since Wednesday night, were being gradually restored in Aleppo by Thursday afternoon.

In the capital Damascus, heavy fighting erupted in the southern Tadamun district, the Syrian Observatory said.

"Syrian troops withdrew from the neighborhood following heavy clashes with rebel battalions, which resulted in the killing of four rebels and at least three soldiers," the Britain-based watchdog added.

And for the first time, regime forces raided the exclusive Muhajireen neighborhood of north Damascus, arresting about 20 young men.

At least 67 people -- 36 civilians, 16 soldiers and 15 rebels -- were killed across the country Thursday, according to the Observatory.

What NGO? What is this source for information? Yesterday a video showed terrorists executing people in cold blood, and today this news comes, ha ha ,,, what a joke..

That was painful to see as well. Still, can't blame the assailants for the hatred they have after so many were massacred by the Bashar Shabi7a.

fadi_alberiuti i can only wish and hope......Long Live The Syrian Civil War!

It will be a very long and protracted civil war.

Yalla tit for tat, you kill one i kill one

Yala ya habibi like the regime never executed anybody, cool video lol

Yesterday a video showed terrorists executing people in cold blood, and today this news comes, ha ha ,,, what a joke..

God Bless them and anyone else fighting for dignity and freedom. To all those supporting bashar and his regime..enough is enough. His time is over. Syria had become a wasteland under his and his father rule..just consuming oxygen and giving out corbon dioxide. I hope the future is brighter for this , like Lebanon, tormented by evil, backward, non prhressive brainwashing and neanderthal traits.