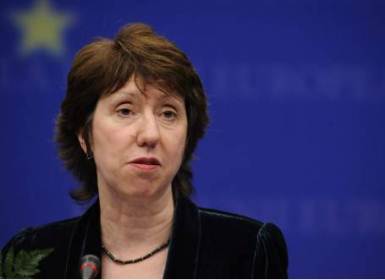 European Union foreign affairs chief Catherine Ashton called Thursday for a rapid appointment by the U.N. and the Arab League of a successor to Kofi Annan after he quit as Syria peace envoy.

Expressing her "deep regret" in a statement, the English baroness said the EU "calls for the early appointment of a successor to carry on Mr. Annan's work towards a peaceful political transition in Syria."

Former U.N. chief Kofi Annan said on Thursday he was stepping down, complaining that his April peace plan did not receive support and bemoaning the lack of consensus on the U.N. Security Council.

China and Russia last month vetoed a resolution that would have threatened sanctions against Syria targeting President Bashar Assad if Damascus failed to act on Annan's battered blueprint.

That plan "remains the best hope for the people of Syria," Ashton added, warning of greater suffering ahead under further militarization of the conflict as the Syrian army deployed fighter jets against rebels armed with tanks around the commercial capital Aleppo.

"Annan's resignation makes clear how unfortunate it has been that the U.N. Security Council was unable to agree to a resolution," Ashton said after the United States hit out at Russia and China when they stymied Western and regional diplomatic efforts to halt the 17-month-old conflict.

Annan "invested an enormous amount of time and personal dedication to his difficult and dangerous assignment," Ashton said, pledging that Europe would maintain its drive to find backing under a new U.N.-Arab League negotiator.