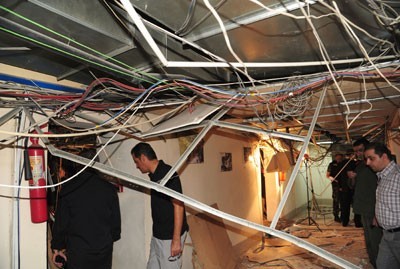 "It is clear that the blast was caused by an explosive device," Zoabi said. "Several of our colleagues were injured, but there were no serious injuries, and no dead."

The broadcaster said that the blast hit the third floor of its headquarters. It remained on the air despite the bombing.

The television building lies in the Omayyad district of Damascus, a highly guarded area surrounded by multiple security barriers.

The bombing was not the first attack on the pro-government media in Syria.

On July 18, four top security officials -- including President Bashar Assad's brother-in-law -- were killed in a bombing claimed by the rebel Free Syrian Army that rocked the heart of the regime.

A subsequent investigation found that a technician in the office of Hisham Ikhtiar, head of the National Security agency, had planted explosives in the room where the crisis cell meeting was held.

This media and propaganda outlet should be silenced..... and forever

well.... if memory serves me well, it was the actions of M8 in 2008 and the words of a certain lunatic general that resulted in the burning of media outlets.
to date, i don't know of any statement or action by M14 calling for the silencing or burning of an opposition's media

It isn't a wahabi vision of conformism. It's a leftist point-of-view... Haven't you studied this?

these ppl are civilians... shame on FSA

Good riddance, this place is the epi-center of propaganda and fabricated news stories, my only regret is that the whole building wasn't brought down.

The news about Saddam having WMD was not fabricated, since we saw it on CNN. You are as gullible and naive, as the ones you are worried about in Syria watching al Ikhbaria

Dude do not compare CNN to SANA because it's like comparing apples to oranges, CNN's as well as most media outlets report on Iraq's WMD was based on what was suppose to be intelligence provided by U.S government sources which turned out to be baseless I think we all agree on that, but remember this, CNN is an independent news worthy channel and not a corrupt terrorist regime's mouth piece like SANA and Ikhbaria, but if you're so inclined you can continue making those 2 sources your news source, let SANA or Ikhbaria be critical of the regime just once and see what happens to those responsible, on the other hand CNN has no problem being critical of anyone including the president himself, is everything CNN and other independent news outlet report is accurate? The answer is probably no,but the question is would you rather get your news from SANA or CNN? I think you know the answer to that.

Now that your mentioning CNN, I can imagine how their best reporter Hala Gorani once was a suitable candidate for Bashar. But she turned him down... and he picked Asma instead. she must be extremely relieved!

Ironic indeed.....! A thug paid mouthpiece of hizb of terror, an avid supporter of the most criminal minority regime, a mowaten of iran, is talking about democracy!!!!!! Speechless to say the least......... wow!

Sorry, thats what Hezbollah and their Iranian masters do.