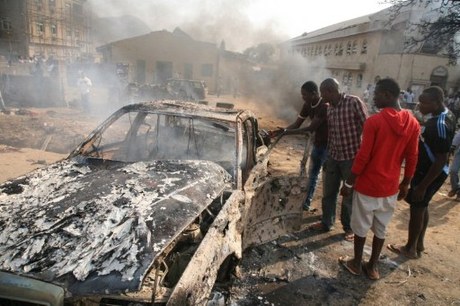 Residents in central Nigeria said Thursday that police have raided scores of homes and beaten unarmed civilians while searching for the perpetrators of a church massacre that killed 19 people this week.

The police spokesman in Kogi state, where the church slaughter occurred late Monday in the city of Okene, denied the allegations.

"Police are going around in the area (Okene) trying to get at the criminals, so there is not anything to worry about," spokesman Simon Ile said.

One Okene resident told Agence France Presse that police "went door to door" early Thursday and that many people have fled the city.

"They beat up residents and made arrests," he said. "Policemen broke into my home and whipped me as I couldn't flee because of the fracture on my leg."

Another resident offered a similar account. "We had to run away from our homes because of the raids by armed policemen who went house to house," he said.

Asked if there had been any reports of violence between residents and officers, Ile said, "no," adding that police had cast a "dragnet everywhere until the case is solved."

A top U.S. rights group urged Secretary of State Hillary Clinton to press the issue of abuses by security forces when she meets with Nigerian President Goodluck Jonathan later Thursday.

Under the guise of investigating violent attacks, "security agents have rounded up hundreds of people and routinely detained them incommunicado without charge or trial," Human Rights Watch said in a statement this week.

Gunmen stormed an evangelical church in Okene on Monday and cut the electricity before opening fire on the worshippers inside, killing at least 19 people.

No group has claimed the attacks, but Boko Haram Islamists have repeatedly targeted both Christians and the security services in Nigeria, Africa's most populous country.

Police said they have arrested three suspects in connection with the Kogi church massacre and subsequent shooting.