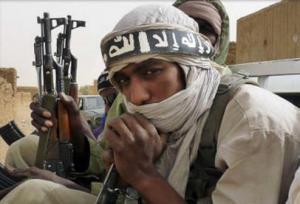 Muslim jihadists occupying northern Mali on Thursday said they had cut off the hand of a thief in accordance with strict Islamic law which they have imposed on the population.

The first reported amputation since the extremists seized the north of the country four months ago came as diplomats warned of a ticking time-bomb which could put the world at risk if the region becomes a safe haven for terrorists.

As west African mediators attempt to engage in talks with the Islamist groups and the option of military intervention lies untried, the extremists carried out a further grisly religious punishment.

They have already stoned an unwed couple to death and beaten other people.

"Yes, I confirm it. We applied sharia in Ansongo yesterday (Wednesday). The hand of a thief was cut off. Sharia demands it," a leader of the Movement for Oneness and Jihad in West Africa (MUJAO), Mohamed Ould Abdine, told Agence France Presse.

A local government official in the town south of Gao, one of the chief centers of the vast desert region in northern Mali, said he witnessed the public amputation.

"I am in Gao now, but yesterday I was in Ansongo. There was a lot of blood when the hand was cut. It was the hand of a thief who stole a motorbike," he told AFP.

Abdine said the sentence was "the law of God".

On Sunday scores of protesters swarmed the main square in Gao to prevent Islamists from cutting off the hand of a another thief, but Abdine said the sentence had only been put off.

"We will do the same thing in Gao soon. Last time we postponed because of the intervention of important people and not the population. The population can't do anything," he said.

In the small town of Aguelhok, another armed Islamist group, Ansar Dine (Defenders of Faith), publicly stoned an unmarried couple to death in late July. They have forced women to cover up and whipped smokers and drinkers.

In the ancient city of Timbuktu, Ansar Dine have destroyed World Heritage shrines dating back to the 15th century, denouncing them as idolatrous.

The Islamist groups, which security experts say are acting under the aegis of Al-Qaida in the Islamic Maghreb (AQIM), seized key northern cities in the chaos following a coup d'etat in Bamako on March 22.

The takeover was spearheaded by Tuareg rebels seeking an independent state for their nomadic desert tribe, but the extremists have pushed them aside and seek an Islamic state in the zone -- an area larger than France or Texas.

U.N. leader Ban Ki-moon on Wednesday called on the Security Council to impose sanctions against the extremists, slamming the "callous" destruction of nine of Timbuktu's 16 religious shrines.

Ban said the 15-nation council should "give serious consideration to the imposition of targeted travel and financial sanctions against individuals or groups in Mali engaged in terrorist, religious extremist or criminal activities."

In Bamako, the interim authorities who took over from the junta have stood by helplessly as the Islamists have deepened their hold, and are now working to form a stronger unity government on the orders of west African mediators.

The Economic Community of West African States (ECOWAS) has 3,300 troops on standby to deploy in Mali, and the U.N. Security Council is ready to approve this, but is awaiting a formal request from Bamako.

Meanwhile diplomatic efforts to solve the crisis have been stepped up and chief ECOWAS mediator, Burkina Faso Foreign Minister Djibril Bassole, met with leaders of Ansar Dine in Mali on Tuesday.

Ansar Dine leader Iyad Ag Ghaly said he accepts the mediation efforts, but Bassole urged them to distance themselves from "terrorists" such as AQIM as a pre-requisite for peace talks.

But French U.N. envoy Gerard Araud has predicted that military action to recover the lost territory is unavoidable.

"There will be a military intervention because you do not negotiate with al-Qaida. You have to fight these people," he said in an interview Tuesday.

Salamatu Hussaini Suleiman, ECOWAS commissioner for political affairs, warned that if Mali is allowed to become a safe haven for terrorist networks "no country in Africa or outside the continent will be safe."

I'm sorry to say that if this is the way Moslem treats fellow Moslem in Moslem countries, what future do non Moslems have in these countries?

Unfortuntely the current regime in Syria is more brutal.