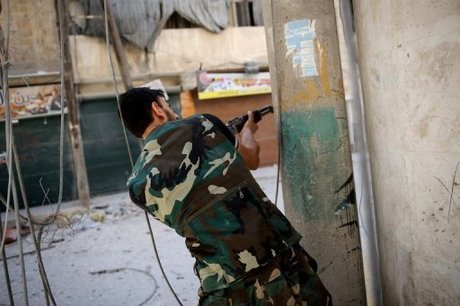 Syrian forces pounded rebel hubs in the northern city of Aleppo and battled opposition fighters around Damascus on Friday, activists said, as the U.N. reported a surge in the number of people fleeing.

And despite the imminent departure of the observers, the United Nations announced that veteran Algerian diplomat Lakhdar Brahimi will take over as international envoy from Kofi Annan, who quit earlier this month.

On the ground, violence was also reported in other towns and villages across the country, with the bloodletting showing no signs of any let-up a day after the United Nations formally called time on its observer mission.

"The violence and the suffering in Syria must come to an end," U.N. chief Ban Ki-moon said in a statement announcing the appointment of Brahimi.

Ban called on the international community to give "strong, clear and unified" support to the new envoy, after Annan complained that his mission had been mission had been hamstrung by the deep rift on the U.N. Security Council between the West and traditional Damascus allies Beijing and Moscow.

But in sign that the divisions remain as large as ever, Washington called for clarifications on Brahimi's mandate and Moscow called off a meeting on the conflict that had been planned for Friday after Western and Arab governments said they would not attend.

On the ground, at least 72 people were killed as the regime continued its onslaught on Friday, according to the Syrian Observatory for Human rights, a watchdog which has a network of activists on the ground.

The army clashed with rebels near the main military airport in Damascus and shelled southern parts of the capital as well as areas of the commercial city of Aleppo and the eastern province of Deir Ezzor, the Observatory said.

Deadly violence was also reported in the provinces of Homs and Daraa, the cradle of the uprising that began with peaceful protests in March 2011 but has escalated into an increasingly vicious battle between armed rebels and government forces.

Opposition factions reported that 65 bodies had been found dumped on a rubbish tip in a town near Damascus, claiming the victims had been bound, executed and set on fire by pro-government forces.

The Syrian Revolutionary Command Council issued a poor quality video which showed, some of the bodies were in just underwear or half-dressed, their limbs splayed apart, and hands tied behind their backs. Many were charred beyond recognition.

"The victims were handcuffed, extrajudicially executed and burned by Assad forces," the SRGC said in a statement.

It is impossible to independently verify such claims as journalists are unable to report freely in Syria.

With the international community still deeply divided over how to end the conflict, the U.N. said the number of Syrians seeking refuge in neighboring countries had now soared to at least 170,000.

"There has been a further sharp rise in the number of Syrians fleeing to Turkey," the U.N. refugee agency said.

"After hearing the refugees and their account of the massacres of the regime, Mr. Bashar al-Assad doesn't deserve to be on this earth." he said.

Russia rejected a proposal to set up no-fly zones to help fleeing civilians after the United States said it was ready to consider the move.

"But if you try to create no-fly zones and safety zones for military purposes by citing an international crisis -- this is unacceptable," he said.

More than 23,000 people have died since the revolt against Assad's iron-fisted rule broke out, according to activists, while the U.N. puts the toll at around 17,000.

Assad has described the conflict as a battle for the very survival of his minority Alawite-led regime against a foreign "terrorist" plot aided by the West and its allies in the region.

But he has faced a string of high level defections, including by prime minister Riad Hijab and senior general Manaf Tlass, and a bomb attack that killed four security chiefs.

"It is clear that both sides have chosen the path of war... and the space for political dialogue and cessation of hostilities and mediation is very reduced at this point," U.N. assistant secretary general for peacekeeping Edmond Mulet said.

And in a damning report this week, a U.N. panel said government forces and their militia allies had committed crimes against humanity including murder and torture, while also accusing the rebels of war crimes but to a lesser extent.

Good to see justice for Lebanon ..

How is that justice for Lebanon??!! inno hatred wou khallas? if we Lebanese are civilized 1 tenth of what we claim to be we wouldn't be making statements like this and we wouldn't be destroying our country every 10 to 15 years!

The regime will fall but the delusional bashar wants it to be as bloody as possible.

This is justice from GOD and who are we to question GODS judgement....ALLAH AKBAR :)
Long Live The Syrian Civil War

First of all, do you even believe in Allah? Isent Jesus Allah for you? Secondly, you dont even know what justice is nor what Gods judgement is. But keep wishing evil like this, it will all come back to haunt you. May you get all the evil you wish upon Syria and upon Muslims. Allaho akbar indeed. Not jesus or any other prophet and certainly not anyone of your manmade "saints" that you pray to.

Well said mansour ,watch out for lebneneh he will call us haters,keep up the fighing in Syria ..

May you get the evil you wish for syria for yourself.

No dude Syria is evil .