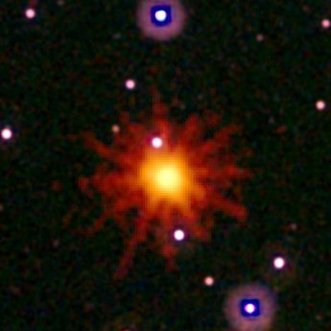 Astronomers are puzzling over an extraordinary cosmic blast in a distant galaxy.

The gamma-ray explosion was observed on March 28 by NASA's Swift satellite. Flaring from such an event usually lasts a couple of hours.

Scientists say this blast is unusual because the effects are long-lasting. More than a week later, they continue to see high-energy radiation spiking and fading at the source.

The burst was likely caused by a star that was ripped apart after drifting too close to a super-massive black hole.

Since the explosion, the Hubble Space Telescope and Chandra X-ray Observatory have focused on the aftermath. Hubble will observe if the galaxy's core changes brightness in the coming days.

The galaxy is 3.8 billion light years from Earth. A light year is about 6 trillion miles.