PSP to Rally in Support of Syrian People, Expulsion of Syrian Ambassador 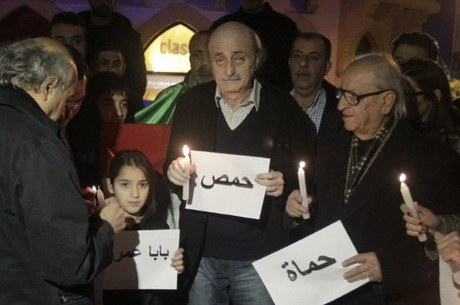 Progressive Socialist Party is scheduled to hold a popular rally on Friday afternoon near Samir Kassir Square in downtown Beirut in solidarity with the Syrian people and to demand the expulsion of the Syrian Ambassador to Lebanon Ali Abdul Karim Ali.

“This rally comes in support of the political stances that are biased in favor of the Syrian people and to denounce the persistent of the killing machine,” the party’s media officer, Rami al-Rayyes, told the daily on Thursday.

He pointed out that the Syrian Ambassador “can no longer stay in Beirut” over the “daily massacres committed against the Syrian people by the regime.”

On Wednesday, the March 14 alliance’s youth movement and activists marched to the Foreign Ministry in Ashrafiyeh to demand the expulsion of the Syrian Ambassador.

Rayyes noted that the party had previously held several sit-ins to support the Syrian people and to protest the disappearance of Shebli al-Aysami.

Al-Aysami, 87, a co-founder of Syria's ruling Baath party, who fled his native country in 1966 over political differences, was last seen in May 2011 in Aley.

Over 25,000 people have been killed since the uprising against President Bashar Assad's rule broke out in March last year.

The sad part is that in a country (like Lebanon) that is filled with idiots like you and who do not admit any wrong doing, nothing is weird.

The Lebanese at the that were in a civil war, and this means: kill or be killed! The Jabal people did not start it and they were forced to do what needs to be done to preserve their existence. Or maybe you believe that the other group(s)did the same (kill and displace them all) then you would have been happy!

rest assured that if the existence of the Jabal people is threatened again, we will not hesitate from doing any of that over and over again!! We do not attack anyone, but the ones who dare think of harming my people will regret it for the rest of their lives.

This man must not be trusted in any way or form. He is a friend and an enemy to all. If M14 are clapping and cheering for him today, tomorrow they will curse him. Same goes for M8. The Lebanese people in general tend to have goldfish memories.

Hi Lebanese from the Jabal what a great comment brother .Thumbs up for you and your Jabal..

To: Lebanese From The Jabal

Please do not insult our intelligence by re-writing history and claiming that the respectable Druze community acted only in self-defence. Kamal Joumblatt has had a phobia from Maronites since the day he was born, and obviously instilled this same fear into his son's head. There are countless Christian towns and villages that were ATTACKED by your heroes, in which genocidal crimes were committed, and to this day hold the bells of their churches like some trophy. Even if Geagea and Aoun frogive Joumblatt for this, neither I nor the Christian community will ever do. Joumblatt is a criminal and he is yet to pay for his crimes.

The truth is LF went to the Druze mountains along with the Israeli army not the other way around. The Druze were in a defensive position. Has any one seen " Daleel al mouqatel" that was given to every LF fighter who went to the jabal. That will open lots of eyes about the hatred then. Now, they have all kissed and made up under the Patriarch Sfeir, they should all put the past behind them. Period

Can't we just forget about the Civil War? This continues to haunt us in everyday Lebanese politics and is the main reason why Lebanon cannot progress.

How can we look into the future if we are haunted by the pass?

to FlameThrower and friends:
thanks for not missing any occasion to makes us remember harb el jabal really... but guess what in early 90 el tawhid toked control of tripoli and killed hundreds of opponent in the majority Christians and are now part of march 8 coalition (with GMA)
Syrian national party fought against frangieh forces (marada) and killed many (either sides) and are now part of march 8 coalition (with GMA)
Syrian army did what it did no need to go over there (despite sometimes i think that FPM followers tend to forget) and we still are finding graves of executed Lebanese soldier and guess what march 8 is now with same Syrian regime (as is GMA)
GMA himself gave order to pound ashrafieh with heavy artillery during harb el elgha2 (or harb el tahrir call it like you want doesn't changes the fact that he did) so....

well guess what it was WAR, and I'm not writing this to try make people angry again but to show the other side, the side that FlameThrower and co. likes to ignore, to show that during war everybody fought everybody and it is really the time to try to think for the future , not to forget the past but to remember it in a way not to act like this again....

as for the PSP stand against Syrian regime it is most welcome, i wish GMA could have some good sense and do the same... who knows miracle can still happen...

one last think during 7 ayyar (do u remember 7ayyar FlameThrower) well our hero GMA was in France giving the order.... what a resistant man what a revolutionary... well guess what everyone has a part to play to help his country, even if he is "living" abroad...
hope my comment would be of some help.....
no harm meant in anyway...
and will be there with abou taymour or anyone standing with the Syrian revolution and trying to help the Syrian people in anyway, even if it is only words...any help is fine even if it is only worlds...
have a good day all
Nevertheless.....

Sorry again 7 aib not 7 ayyar ( so much dates, so much strugle, so much bloid for a damn small country.....

M8 people are stuck in the past and are unable to move forward...we should all learn from our past and stop making excuses...

Do you ever re-read your own comments before you make a comment such today's to see if you follow your own advice? Or read those of your buddies? Oh, perhaps you don't because you are not stuck in the past!!!

That applies to PSP, LF and Kataeb in 82-83. They have kissed and made up since, so let it go

@flamethrower,,,,,talking abt the true leader.where is your hassouna,,huh?can you call him one like how you describe a true leader?

Wrong. The reason why the uprising has lasted two years is because the opposition is fragmented between those seeking a political solution and those wanting to defend themselves and take up arms against the regime.

The reason why Assad has lasted is not because of "the majority of Syrians like him". Assad has long suppressed his people and his brutality in residential areas are well documented. It is conceivable to think the majority of the people still support Assad, but rather they support stability, which is a big difference.

karim_m1 = FT/mowaten and the other 10 nicks. what a douche he is... in need of self-esteem boosting by falsifying votes.

Forget about the leaders. There are desperate people who revolted against a regime and faced brutal repression and took arms. There is no "opposition leader". The rebels are a group of individuals that felt no choice but to use violence to topple the regime, just like Libyans did and just like Southern Lebanese did when faced with an Israeli occupation.

The revolution is not fabricated. How many anti-regime peaceful protests occurred in the beginning of the crisis? There is a legitimate hatred towards the Syrian regime, and to deny it is equivalent to denying that Israel's actions in Lebanon are immoral.

Yes the opposition has foreign backing, but that doesn't justify the actions of the regime, nor does that mask the legitimate hatred and oppression of the Syrian people by the regime before and throughout the crisis.

follow in example, coz u guys here all of u and the ones that havent commented on this article yet , u need to change ur ways coz its pathetic!