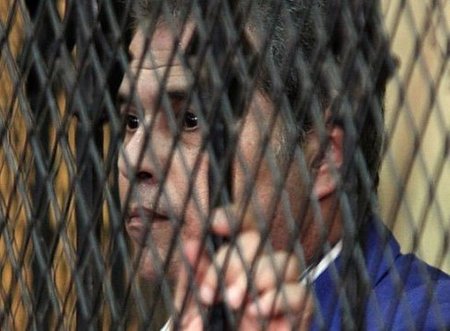 A television channel chief and presenter denied calling for the murder of President Mohammed Morsi when his trial on incitement charges opened in the Egyptian capital on Saturday.

"This is a political trial. The Muslim Brotherhood wants to silence all dissent and reproduce the system from before the revolution," he said.

Okasha added that he was in the dock for "revealing the Brotherhood's involvement in attacks on police stations, courts and prisons during the revolution" in 2011.

Okasha's al-Faraeen channel, suspended on August 16, aired a show that was stridently anti-Morsi and anti-Muslim Brotherhood, the party from which the leader emanates.

The charges against him came at the same time that Islam Afifi, the editor of small independent newspaper al-Dustour, was accused of spreading false news and inciting disorder.

Okasha arrived at court surrounded by his supporters who chanted "The people want al-Faraeen!"

The court set the next session of the trial for October 3 after hearing the case for the defense, which argued that the complaints against Okasha were not filed by Morsi personally.

Both Okasha and Afifi were banned from leaving the country in August.

Afifi was freed after spending several hours in custody on the day of his trial, after a decree signed by Morsi scrapped preventive detention for alleged publishing crimes.

Afifi was the first journalist to go on trial since the overthrow of veteran strongman Hosni Mubarak in February last year.

After his inauguration on June 30, Morsi moved to bolster his power over the influential military and a state media that had been hostile towards his once banned but powerful movement.

He got the Muslim Brotherhood-dominated upper house of parliament to name new editors-in-chief for state media that had been hostile to him and the Islamist group.

Morsi's opponents accuse him of seeking to muzzle the press, and there has also been international concern.

U.S. State Department spokeswoman Victoria Nuland said that the prosecutions of Okasha and Afifi ran counter to the spirit of last year's revolution.