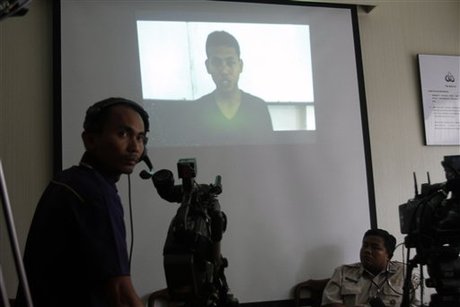 Arrested Indonesian terror suspects have revealed plots on the parliament building and to attack police in the name of jihad, a senior official said Friday.

"We worked with the anti-terror police squad to intensify hunting for suspects still at large and also stepped up security measures to anticipate any possible attacks," he told Agence France France.

"Our plan is to break up Solo like what happened in Ambon and Poso. We want to uphold Islamic Sharia and create a Muslim caliphate in Indonesia," he said referring to violence between Muslims and Christians, killing thousands in early 2000.

In an interrogation video released by police on Thursday, Setiono said they targeted police as they were considered as infidels for arresting and killing Islamist militants.

Another terror suspect said he surveyed the parliament building three times before he was arrested by police in July, the senior anti-terror official Mbai told AFP without giving details about what stage the plot had reached.

"There are several small groups which their underground works are not related to each other, but they all came from the Jamaah Islamiyah (JI) and the Jemaah Anshorut Tauhid (JAT)," he added.

JAT, dubbed a terrorist organization by the United States, was founded in 2008 by jailed radical cleric Abu Bakar Bashir.

Muslim-majority Indonesia suffered a series of deadly attacks over the last decade by terror network JI -- blamed for the Bali bombings in 2002 that left 202 dead. There has not been a major incident since 2009 but experts believe small cells are still ready to attack. Police on Thursday launched a manhunt after finding explosive materials at a house in Jakarta.