Syria Druze Back Sunnis' Revolt with Words but Not Arms 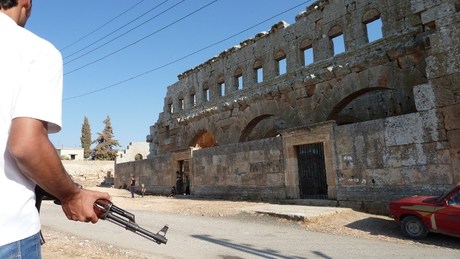 The Druze of Idlib province have not yet taken up arms in the war to unseat Syrian President Bashar Assad but have declared their support for Sunni Muslims at the heart of the rebellion.

"We are and will forever remain brothers," says Ayham, an elder of the Druze community in the northwestern province where the two communities live side by side.

Among mountains covered with olive groves and criss-crossed by rocky paths that wind among magnificent Byzantine ruins, 14 villages inhabited by the Druze religious minority live in harmony with their Sunni neighbors.

Locals give Jabal al-Aala, near the Turkish border, the name "little Druze mountain," a reference to an eponymous and historic region in southern Syria that is also Druze-dominated.

"For years everyone here, Druze and Sunni, has wanted the end of Bashar Assad's regime," says Abu Ahmad, an elder of the Druze village of Qalblozeh, home to a fourth-century Byzantine church.

"When the protests began 18 months ago we wanted to take part and send delegations next door to Kafar Takharim, where the revolution was flourishing," recalls the thick-moustached man in his fifties.

"The local rebels told us not to move in order to keep our villages as a safe haven for populations fleeing army intervention," he continues.

"No one here supports Bashar. He may have a few on his side, but they do not make this known," says Ayham. Some Druze defectors from the Syrian army now live in the village having gained permission to stay and not return to their barracks, he adds.

Jabal al-Aala is populated by farmers, who tend to their olive groves and tobacco plants.

It is a semi-autonomous place, isolated from regime-controlled urban centers and suffering the consequence of having no electricity.

Ayham proudly honors his guests with a generous meal cooked over a wood fire, asserting that "everything is harvested (locally) here."

Public services have ceased to function in Qalblozeh. Elders arbitrate local disputes and lead the community.

But this fiercely independent spirit does not undermine good relations and solidarity with Sunni neighbors.

Druze villages have welcomed with open arms numerous refugees fleeing the army's bombardment of rebel-controlled areas in Idlib, who are housed in homes, schools and other public buildings.

The Sunni-Druze solidarity is confirmed on visits to surrounding Sunni villages.

"Our relations are very good, as before the revolution," says a resident of Qorqania, a hamlet very close to regular scenes of helicopter bombardments.

The Druze villages of Jabal al-Aala are not spared the threat of bombardment either. The Syrian army keeps two garrisons stationed 20 kilometers away, at Harem and Salqin.

Rebel Free Syrian Army convoys also rumble through the region, sometimes with boisterous cheering after returning from an operation.

Several rooms at a clinic in one village are reserved for injured FSA fighters, on the orders of local commander Abu Saeed.

But so far, no Druze number among the rebel ranks.

"Firstly, we have no weapons," says Ayham. "Second, we are loath to spill the blood of our countrymen."

He clarifies: "All the Syrian Druze support the revolution and have solidarity with refugees... (but) we fear the spectra of civil war."

"The regime wishes to divide the Syrian people, and we will not fall into that trap," says Abu Ahmad. "If the revolution were against foreign aggression, we would be the first to battle."

"The army has not attempted to penetrate here. Our Sunni neighbors have promised to protect us. And if the army comes, we will fight," affirms Ayham. "You will see our reputation as a warrior people is deserved."

no, ur wrong actually. the druze wont spill other druze blood and they have no state to back them with arms... therefore they are hesitant to act for or against until a settlement between the big powerbrokers at play is reached. the alternative is to die cheaply and the druze dont die in vain, not for saudi arabia and not for the russia! what ur comment illustrates is that u dont like the druze. or that u are stupid.