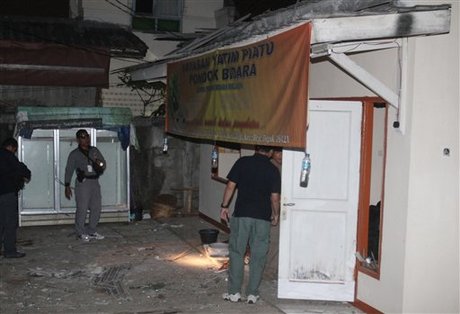 A suspected militant was critically injured when a bomb apparently being prepared for terrorist attacks exploded at a house near Indonesia's capital, police said Sunday. At least three other people living nearby were injured, and witnesses said one of two suspects who fled also appeared to have suffered an injury.

An elite anti-terror squad was searching for the two men who reportedly escaped after the strong blast went off late Saturday in Depok, a town on the outskirts of Jakarta, said National Police spokesman Maj. Gen. Anang Iskandar. The incident came just days after police raided another home in Jakarta where bomb-making materials were found in connection with a terrorist group that allegedly plotted to kill police and bomb the country's parliament building.

Iskandar said police at the latest site found a badly injured man whose left hand had been cut off. Bomb-making devices were found scattered around him.

"We suspect he was making bombs when one of them detonated prematurely," Capt. Agus Widodo, a local police chief in Depok, told reporters at the scene. "His condition is critical. We cannot talk to him."

He said the man also suffered burns covering up to 70 percent of his face and body.

Police questioned five people living near the rented house — listed as an orphanage foundation office and herbal clinic, but never opened to the public — including two injured men and a woman with slight wounds to her head.

They told investigators that they saw two men flee on a motorbike just after the blast, and that one of them managed to jump a fence even though he appeared wounded, Widodo said.

"It was actually a militant safe house from evidence found there," Widodo said, adding that a group was apparently preparing bombs for terrorist attacks.

Police seized a big haul of bomb-making materials, including six pipe bombs, three grenades, two machine guns and a Berreta pistol, Iskandar said in a text message. A bomb squad team was investigating the explosives that were packed with nails to maximize impact.

The incident came amid a security crackdown in recent days in which two militants were killed and three others arrested. Just four days earlier, police found bomb-making materials at another home in Jakarta, where suspected bomb maker Muhammad Toriq lived, but managed to escape when police raided his house.

Iskandar said there was a resemblance between Toriq and the man in critical condition. He said police would conduct a DNA test after gathering a sample from Toriq's mother to determine if the identities match, adding that explosives found in Depok were similar to the homemade bombs discovered at Toriq's home.

Toriq is believed to be linked to a militant group that planned to shoot police and bomb the parliament building to wage "holy war" and establish an Islamic state.

Indonesia, a secular nation with more Muslims than any other in the world, has been battling terrorists since 2002, when militants linked to the Southeast Asian network Jemaah Islamiyah started attacking Western nightclubs, restaurants and embassies.

More than 260 people have been killed, many of them foreign tourists.

Recent terror attacks in Indonesia have been carried out by individuals or small groups and have targeted local "infidels" instead of Westerners, with less deadly results.