Want to Save Fuel? Go Fly a Kite 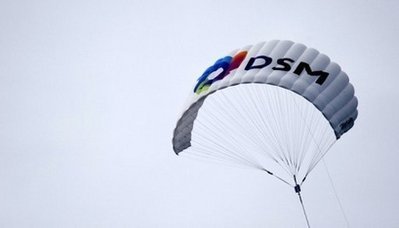 The blue-hulled vessel would slip by unnoticed on most seas if not for the white kite, high above her prow, towing her to what its creators hope will be a bright, wind-efficient future.

The enormous kite, which looks like a paraglider, works in tandem with the ship's engines, cutting back on fuel consumption, costs, and carbon footprint.

"Using kites you can harness more energy than with any other type of wind-powered equipment," said German inventor Stephan Wrage, whose company SkySails is looking for lift-off on the back of worldwide efforts to boost renewable energy.

The 160-square-meter (524-square-foot) kite, tethered to a yellow rope, can sail 500 meters into the skies where winds are both stronger and more stable, according to the 38-year-old Wrage.

The secret to the kite's efficiency lies in its speed and computer-controlled flight pattern.

The idea is for the kite to describe figures of eight, which increases airspeed, said Wrage, who has been working on the new technology for 10 years and who still enjoys flying kites on the beach for fun.

"If you double the airspeed you multiply the energy by four. That's the secret of the system," he added.

A new 320-square-meter kite, recently produced, "has a towing force of 32 tonnes which is more than what two engines on an A320 Airbus (aircraft) can produce. So we're not talking toys," he said.

The kite towing the 87-meter-long ship Theseus would produce a maximum of 16 tonnes of thrust in perfect wind conditions.

Retailing at half a million and one million euros (715,000 to 1.3 million dollars), the kites allow fuel savings of 15 to 25 percent depending on wind and shipping routes, said Wrage.

The strongly-built kites are best suited for slow moving ships, such as bulk carriers and tankers, which do not exceed 15 to 16 knots and which ply windy trans-Atlantic or trans-Pacific routes, according to SkySail engineers.

Customers could recoup their money within two to six years, depending on bunker fuel prices, shipping routes, and types of carrier, they added.

But the company, with funding of 47 million euros mostly from venture capital investors, has struggled to stay afloat.

"When I started SkySails, the oil price was at 21 dollars (a barrel) so everyone thought I was totally nuts. We were laughed at a lot," explained Wrage.

To date, only five kites are in commercial use around the world.

"It has been a tough time for us," Wrage acknowledged.

But the economic recovery -- along with rising oil prices -- is fueling new interest in this new "green" technology, not only from ship-owners, but from large trading companies eager to advertise efforts to reduce carbon footprints.

But not everyone in the shipping industry is convinced.

The system "isn't suitable for most fast-going container ships," said Max Johns, a spokesman for the Association of German Ship-owners.

"The system works but has proved difficult to use, with expensive kites being torn, and all this at a time when the industry is suffering a severe downturn," added Johns.

The kite, he suggested, will likely be just one of many systems introduced over the coming years to help slash fuel expenditure, which currently accounts for 60 percent of shipping costs.

Uwe Hollenbuch, an expert on resistance and propulsion at the Hamburg center for ship research agreed, saying wind propulsion "won't play much of a role for now."

Ship-owners believe "they can achieve savings by using larger ships traveling more slowly" rather than banking on the right wind blowing, said Hollenbuch.

"I don't think we'll be going back to wind power," said Uwe Bruemmer, a sea captain now in charge of inspection at the German heavy lifting shipping company SAL, which operates a 16-strong fleet.

"We've looked at the kite, but it wouldn't be worth it," he added.

"To use this sail you need at least six to seven knots of tail wind and you only find this rarely, and only on certain routes," the captain said.

The sail could be used in regions where monsoons winds blow regularly "for example in the Indian Ocean or off the Somali coast where pirates are now active.

"But in such places we can't allow ourselves to go slower. You have to get through as fast as possible".

For now, "we are concentrating on reducing fuel consumption by reducing engine power to 90 or 80 percent", says Bruemmer, who is pinning his hopes on the development of gas-powered turbines.