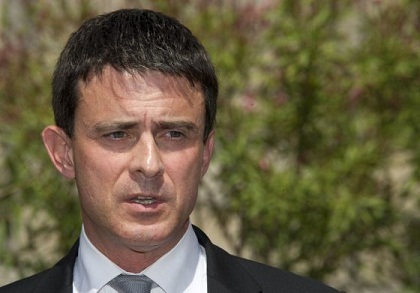 France's interior minister said Wednesday after a French magazine published cartoons of the Prophet Mohammed that freedom of speech, including caricature, was a "fundamental right" backed by the law.

Manuel Valls made the statement after meeting with French Muslim leaders angered by the cartoons, some of which depict the Prophet in the nude.

"Freedom of expression is a fundamental right. Freedom to caricature is part of that fundamental right," Valls told reporters when asked about the cartoons published by the satirical weekly Charlie Hebdo.

However he called for "everyone to act responsibly (as) each individual act, each text, each drawing, each declaration can... spark confrontations".

Valls also warned that any demonstrations that disturbed public order would meet with "a very firm response from the state".

The cartoons have been branded insulting by French Muslim leaders and politicians have accused Charlie Hebdo editor Stephane Charbonnier of acting irresponsibly.

Prime Minister Jean-Marc Ayrault suggested the magazine's editorial team should have taken the current context of widespread Muslim anger over an anti-Islam film into account when deciding whether to publish the cartoons.

Valls has said no protests against the film will be authorized in France following violence close to the U.S. embassy in Paris last weekend.