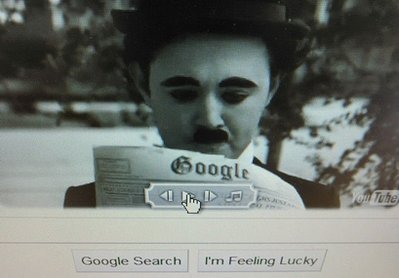 Google paid tribute to Charlie Chaplin on Friday by transforming the celebrated logo on its homepage into a silent movie.

When clicked, the logo, known as the "Google doodle," plays a silent film featuring members of the doodle team acting out Chaplin-esque sketches.

Google said the doodle honoring Chaplin, who was born on April 16, 1889, is its first live-action video and was created by the Google doodle team with help from the Niles Essanay Silent Film Museum.

"We hope that our homage gets people talking about his work and the many virtues of silent film," Google "doodler" Ryan Germick said in a blog post.

The Mountain View, California-based Google frequently changes the colorful logo on its famously spartan homepage to mark anniversaries or significant events or pay tribute to artists, scientists, statesmen and others.