U.S. Embassy in India Shuts due to Risk of Protests 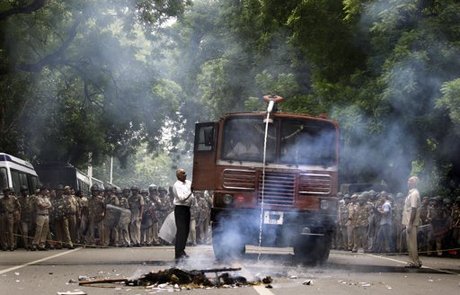 The United States embassy in New Delhi was shut on Friday and employees were asked to stay on the compound due to the risk of protests over an anti-Islam film, embassy sources said.

The decision to close the embassy was taken by authorities to prevent any "untoward incident" near the highly guarded premises in the diplomatic quarter of the capital, an official told Agence France Presse, requesting anonymity.

The embassy school has also closed for the day and U.S. citizens traveling in India, home to the world's third-biggest Muslim population, have been urged to exercise caution and monitor the local media for security updates.

Police in Muslim-majority Indian Kashmir fired tear gas at protesters on Friday who defied an unofficial curfew in the main city of Srinagar, where angry demonstrations are common after Friday prayers.

Kashmir was roiled by protests last Friday and police in the southern Indian city of Chennai detained 86 protesters who attacked the US consulate, smashing windows and security cameras.

By mid-afternoon on Friday, there were no reports of demonstrations in New Delhi or elsewhere in India.

Elsewhere in South Asia, a small group of Muslims held a demonstration in Sri Lanka and security was heightened in the diplomatic quarter of Dhaka in Bangladesh.

France also shut its cultural centers in Dhaka, fearing a backlash over cartoons of the prophet Mohammed published in a French satirical magazine.