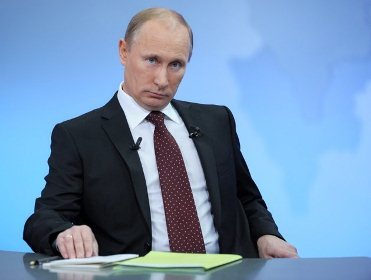 Russia on Monday quietly marked the one-year anniversary of the landmark announcement that Vladimir Putin would return to the Kremlin for a new term which has already seen a fresh clampdown on civil society.

Putin's plan to trade jobs with then president Dmitry Medvedev was unveiled at a ruling United Russia party congress on September 24 last year, followed months later by unprecedented protests against his domination.

After winning the presidential election on March 4, Putin -- who first became president in 2000 -- was inaugurated for an unprecedented third term on May 7.

The anniversary of the controversial move went largely unnoticed in the pro-government or loyal media, and it was business as usual for the country's top political leadership.

But several critics used the occasion to stress that a year after the job swap announcement it was increasingly obvious the country was heading into an unpredictable future.

"There are no longer any checks and balances," the newspaper said.

Social analyst Vladislav Inozemtsev, writing in mass-circulation newspaper Moskovsky Komsomolets, said by supporting the job-swap the country's political elite had made the "most erroneous choice of the past 15 years".

Russia, he said, had "followed in the footsteps of Spain, Paraguay and the Philippines where only the death or deposition of a ruler would abruptly 'break off' a historic epoch."

Parliament under Putin has already voted through a bill making slander and libel criminal offensives subject to massive fines, after Medvedev decriminalized them during his rule.

Meanwhile, all non-government organizations receiving money from abroad are being forced to register as "foreign agents".

"Power is not just a certain person but a system, and right now we are watching how the system is destroying itself," said Inozemtsev.

Political observer Mikhail Fishman, writing in the Vedomosti business daily, said that upon Putin's return the parliament, which used to be known as a mere rubber-stamping body, has become a conduit of "repressions and restrictions".