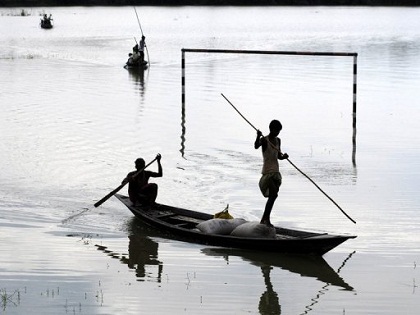 Air force helicopters and soldiers in rubber dinghies helped deliver fresh water and food to flood victims in northeast India on Tuesday as the number of displaced rose to 1.8 million.

Nineteen of 27 districts in the state of Assam have been hit by floods and 13 people have been killed over the past week, according to the latest figures from the local disaster management authority.

The remote and impoverished state, which was rocked by ethnic violence last month, has been flooded three times this year by the mighty Brahmaputra River, which often breaks its banks during the monsoon season.

"We have called in the army to assist civil authorities in rescue operations in several parts of the state where people are trapped with floodwaters entering their homes," Assam's Relief and Rehabilitation Minister Prithibi Majhi told AFP.

Thousands of people in Majuli, a densely populated river island about 350 kilometers (220 miles) from Assam's main city of Guwahati, have fled to higher ground or are crowded onto embankments.

An air force helicopter, flying missions in between rain storms, was seen dropping packets of rice, water, biscuits and baby food on one embankment, sparking a scramble among young and old.

"We just had enough time to pick up some clothes and drinking water bottles before we got onto a boat to reach a highland some distance away," elderly local Bhabani Pegu told the News Live channel.

"There was a breach in the dyke and soon water swept through the village before anybody could react."

Rain is continuing to pound Assam and adjoining Arunachal Pradesh state, where the Brahmaputra flows into India from its starting point in bordering Tibet. The number of displaced people stood at 1.5 million on Monday.

According to the Central Water Commission, the river was flowing above the danger level in at least 10 places in Assam and still rising.

A government relief effort is gathering pace to help the stranded and displaced, but is being hampered by the bad weather.

"We have opened more than 3,000 makeshift camps so far across the state," Assam Agriculture Minister Nilamoni Sen Deka told AFP.

"The actual damage caused to standing crops is yet to be assessed, but going by the magnitude it appears the loss would be tremendous."

"Almost the entire park is under water with animals fleeing the sanctuary to safer areas," a park ranger said, requesting not to be named.

Authorities are asking truckers and other drivers on a nearby national highway to drive at less than 40 kilometers an hour to reduce the risks for wildlife fleeing the floods.

The Brahmaputra has flooded twice already this year, in June and in August, an official in the local weather office told AFP.