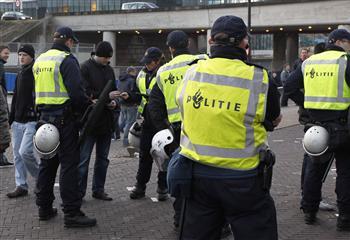 The son of Kyrgyzstan's ousted president has been arrested in London after an extradition request from the United States, according to the Kyrgyz presidency and British diplomats.

The son of ex-president Kurmanbek Bakiyev had applied for asylum in Britain after Kyrgyzstan's new authorities accused him of embezzlement and abuse of power following his father's ouster in 2010 in violent street protests.

"At the request of Kyrgyz and American sides, British law enforcement authorities arrested Maxim Kurmanbekovich Bakiyev on the morning of October 12 in London on charges of serious crimes," said a statement posted late Friday on the president's website.

Nicknamed "the Prince" for his penchant for luxury, the president's younger son Maxim Bakiyev, 34, was a top official in his father's regime heading the country's Central Agency for Development.

He also handled fuel supply contracts for the Manas U.S. airbase in Kyrgyzstan that is key to American military operations in Afghanistan.

The Kyrgyz statement said that Britain was "examining the possibility of extraditing Maxim Bakiyev to the USA", as there is no extradition treaty between Britain and Kyrgyzstan.

It did not specify the charges on which Bakiyev was arrested, saying only that under U.S. law he could face "a long prison sentence" if convicted.

The British Embassy in Kyrgyzstan confirmed Saturday that the arrest came after "an extradition request from the Government of the United States, with which the United Kingdom has an extradition agreement."

"We are conscious that ... the leadership and people of Kyrgyzstan are keen to ensure that those accused of past abuses of power are brought before the courts to answer allegations against them," it said in a statement.

The Central Asiac country wants to extradite Bakiyev from the U.S. if he is sent there but also lacks an extradition treaty with Washington, a source in the presidential administration told Agence France Presse.

"Kyrgyzstan will hold talks with the U.S. on extraditing the former president's son Maxim Bakiyev," the source said.

"However, just as with Britain, Kyrgyzstan does not have an extradition treaty with the USA, so the Kyrgyz authorities will carry out work in this direction."

Maxim Bakiyev's Interpol listing says that he is wanted for fraud by a Bishkek city district court.

He arrived in Britain in June 2010 and applied for asylum, saying that he had been forced into exile on fear of his life.

His father Kurmanbek Bakiyev fled the politically volatile ex-Soviet state after the popular uprising and is now living under official protection in Belarus. Kyrgyzstan is also seeking him on charges of mass murder of protesters.

Around 90 people died and some 1,000 were wounded in clashes between police and opposition supporters that led to the government stepping down, Bakiyev fleeing the country and an opposition coalition taking power.