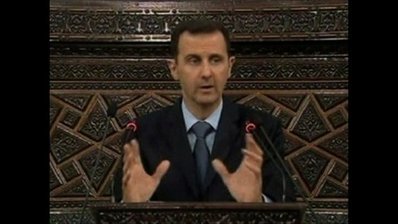 President Bashar Assad of Syria, where more than 33,000 people have been killed in 19 months of conflict, issued a law on GM food Thursday to preserve human life, state-run SANA news agency reported.

Assad, whose forces are locked in a bloody confrontation with armed rebels opposed to his rule, "has approved a law on the health security of genetically modified organisms... to regulate their use and production," SANA reported.

The law is meant "to preserve the health of human beings, animals, vegetables and the environment," the agency added.

Violence in Syria has killed at least 33,000 people, most of them civilians, since it erupted in March last year, the Syrian Observatory for Human Rights says.

The revolt began as pro-reform protests but morphed into an armed insurgency when demonstrations were brutally crushed, with some 100 dead each day.

The law is meant "to preserve the health of human beings, animals, vegetables and the environment," the agency added.

WTF.....since when does he care about humans, animals, or the environment???

Human beings and animals are getting killed,vegetables are getting ruined and environment is devastated,,,,what else left to preserve????

Does anyone else find this extremely ironic to the point of laughter?

I think, it is a big mistake. GMOs don't preserve health, they ruin it. There's no sufficient evidence proving GM foods safety. However, if you look at the cancer world map, you'll see that Syria has one of the smallest numbers of cancer instances compare to other countries. Americans have been eating GMOs for while, and there are around 300 new cancer instances per 100 000 people each year. In Syria it is only 72!!! Well, with this new law on GMO's this might change for the worse...