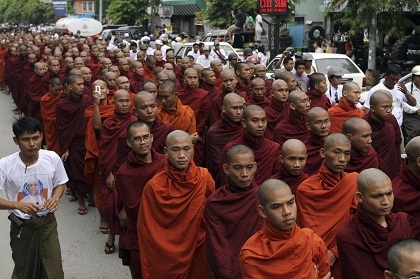 Hundreds of Buddhist university students rallied Wednesday against Muslims in a flashpoint city at the center of communal tensions in western Myanmar, a protest leader told AFP.

The protest in Sittwe, capital of Rakhine state, followed overnight violence in nearby towns as a fresh outbreak of unrest between ethnic Rakhine and Muslim Rohingya stretched into a third day.

At least three people died and hundreds of homes were torched on Monday in clashes between the two sides, according to officials, with a further 50 properties set ablaze on Tuesday morning.

The Rohingya are viewed as illegal immigrants from neighboring Bangladesh by the Myanmar government and many Burmese -- who call them "Bengalis".

More than 800 students joined the rally to call for an end to "studying with terrorist Bengalis", and for the removal of Muslim villages on the road to the university, student protest leader Wai Yan told AFP by telephone.

It was the latest in a series of protests by Buddhists in Myanmar against the stateless Rohingya, who have long been considered by the United Nations to be one of the most persecuted minorities on the planet.

Tensions remain at boiling point across Rakhine state with a curfew in force in many areas, while tens of thousands of Rohingya languish in basic camps, some behind barbed wire in Sittwe, since June's flare-up of violence.

Rights groups say the Rohingya are becoming increasingly desperate as a campaign to force them out of the country intensifies, with Buddhist monks taking a lead role in whipping up sentiment against them.

"There were clashes yesterday (Tuesday) night and houses were burnt in Myebon and Kyauk Phyu towns," Myo That told AFP, adding that he did not know if there were any casualties.

"They took the chance to attack each other at night when it was dark."