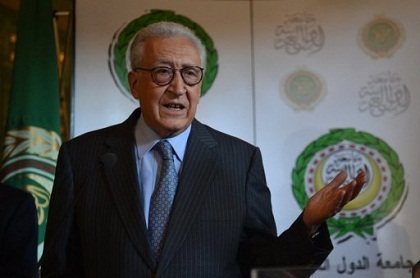 Peace envoy Lakhdar Brahimi said Wednesday that Syria and "most" rebel chiefs have agreed to a truce this week, boosting hopes of a breakthrough in the conflict, but the main armed opposition group was skeptical.

Syria said it was studying the U.N.-Arab League envoy's initiative for a four-day ceasefire during the Muslim holiday of Eid al-Adha and would announce its decision on Thursday, the day before it is supposed to take effect.

"The Syrian government has agreed to a ceasefire" during Eid, Brahimi said, adding "most" rebel leaders contacted said they also would observe it.

"If we succeed with this modest initiative, a longer ceasefire can be built" that would allow the launch of a political process, said the Algerian diplomat.

Brahimi has touted his ceasefire initiative for weeks, but as the date for its implementation fast approaches, there has been no let up in the deadly violence.

The Syrian Observatory for Human Rights said at least 142 people were killed across Syria on Wednesday, 20 of them civilians including women and children massacred in Douma, a rebel-held town near Damascus.

As the bloodshed continued, Brahimi told the U.N. Security Council a truce would be "small step" but he was unsure if it would hold, according to diplomats.

Brahimi appealed for unanimous support, warning the 15-nation council a new failure among its divided members would cause the 19-month civil war to spread, they told Agence France Presse.

The Security Council is bitterly divided over the conflict, with Western nations pressing for action against the Assad regime while Russia and China have been blocking these moves.

But it did agree to back Brahimi's ceasefire call Wednesday in a statement also urging Syria's neighbors to "use their influence" on the parties to push for an end to the conflict.

The rebel Free Syrian Army said it would only stop fighting if Assad's forces do so first, and the jihadist militant al-Nusra Front refused to lay down its weapons.

"The FSA will stop firing if the regime stops," military council chief General Mustafa al-Sheikh told AFP by telephone. However, he added: "It is impossible that the regime will implement the truce, even if it says it will."

The al-Nusra Front, which has claimed suicide bombings and taken part in clashes with the army, said it would not be bound by the call for a truce.

"There is no truce between us and this transgressing regime that is shedding the blood of Muslims," it said in a statement posted on the Internet, quoted by SITE Intelligence Group.

The jihadist group insisted it would not be drawn into a "trick" adding: "We aren't amongst those who accept to play such dirty games."

Al-Nusra joined ranks with the rebel FSA on Wednesday in an assault on Wadi Deif army base in the northwestern province of Idlib, said the Observatory.

A truce would be the most important breakthrough since the conflict spread from demonstrations back in March 2011 to engulf the entire country. Brahimi's predecessor, Kofi Annan, announced a short-lived ceasefire in April.

The violence persisted on Wednesday as the army tried to wrest control of rebel-held enclaves, said the Observatory.

The bodies of some 20 civilians, including women and children, were found in a building in the rebel-held town of Douma east of the capital Damascus, the watchdog said.

The army blamed rebels for the Douma killings and put the death toll at 25.

Warplanes, meanwhile, hammered the rebel-held town of Maaret al-Numan near the Wadi Deif army base along the highway linking Damascus to northern metropolis Aleppo, a key supply route for troops, said the Observatory.

Car bombs blew up in Raqa killing at least eight soldiers and in the southern Damascus district of Daf al-Shouk, where eight people died. State television gave a lower toll of six for the southern neighborhood of six.

"We have information that the rebels fighting the Syrian army have shoulder-launched surface-to-air missiles of several states, including Stingers," said General Nikolai Makarov.

ASSad will use it to try and seize land lost......be careful FSA.

If I were a betting man, I wouldn't put money on a 4-day Aid Cease-Fire holding. I'll give it two days....at the most.
Assad will always find an excuse to "retaliate".