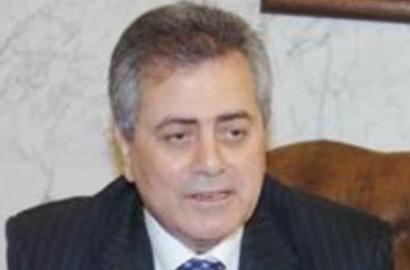 Syrian Ambassador to Lebanon Ali Abdul Karim Ali on Wednesday denied that his country was involved in the assassination of Intelligence Bureau chief Maj. Gen. Wissam al-Hasan, saying Israel or “some Takfiri forces” might be behind the crime.

“Lebanon's stability is in the interest of Syria which condemns all assassinations and is preoccupied with its internal crisis and with confronting the conspiracies plotted by intelligence agents in Europe, the world and the region,” Ali said following talks with Foreign Minister Adnan Mansour.

Ali described accusations against Syria of being behind the murder as “regrettable remarks.”

“We had warned in the past against political accusation,” the ambassador added.

“Syria has nothing to do with this criminal incident and it condemns it and extends condolences to all the families of the martyrs and entire Lebanon,” Ali said.

Answering a question, the Syrian ambassador said “Israel is the side that benefits” from undermining security in Lebanon.

Asked whether he was openly accusing Israel of the crime, Ali answered: “We also accuse some Takfiri forces … that see an interest in chaos.”

who didn't see this coming?

GO home before we kick you out.

No, don't ask him to go home. Let a few Takfiris "break into" the Syrian embassy and behead the SOB. Going home on his own accord is far too easy, let them break into the embassy and teach him the most valuable lesson of his life.

all boot lickers belong in Syria and Iran

yeah we know this old baassist song.
some oldies are good to listen to but this one stinks from the beginning.
you will get killed Ali! One day revenge will get you with the other baasists. but before that you will be tortured in front of your family.
take care.

of course was Israel and Takfiris, they were helped by the Klingons, Romulans, Reavers and the Assads.

Why does Syria want to stop the Samaha court and the Harriri court so badly then? Hassan was a kep player in both? If Israel did everything you would think Iran, Syria and the Hezz would want to let them proceed.

We all know the truth of who did all the killings. Syria and Nassy can shut up now. The world knows they are the biggest killers and enemies of Lebanon.

He is not starting to look stupid he's always been stupid, on your bike baraze breath.

"Lebanon's stability is in the interest of Syria" hahaha the best part of his lies! why did you send samaha to plant bombs in lebanon then?

Samaha was acting alone. Syria has nothing to do with it. As a matter of fact they were trying to persuade him not to plant any bombs in Lebanon. He told them, he already spent the money on the fireworks, and he wants to have fun.

Actually it was dispute between two car dealers.

I hate his guts. But I think takfiris did it.

If you are giving him a chance for an interview, who do expect him to blame? His own country, Iran, Saudi, Qatar. Isn't the best answer always to blame Israel to gain him a few points.
Unfortunately this time everyone around the world knows just "Who Done It", and so he opens his mouth and "Puts his foot in it".

Why waste oxygen on this scum .

It is the Italian's Fault

The arabs also blame Israel on the weather...if Israel didn't exist,the arabs had to invent Israel so they will have who to blame on everything