Hariri to Jumblat: Congratulations on Your Decision to Stay in Syrian-Iranian Alliance 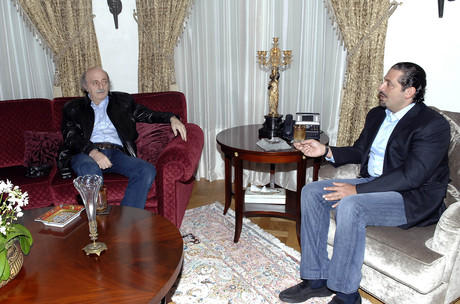 Jumblat snapped back immediately during the interview. “Great. If Miqati said that then he committed a mistake and let us consider Wissam al-Hasan the martyr of the Lebanese state,” he said.

Earlier during the interview, Jumblat revealed that Hariri had telephoned him and asked him to withdraw his ministers from the government.

“May God forgive you Walid Bek. You understand stability as staying in the Syrian-Iranian alliance, so congratulations,” Hariri tweeted.

Jumblat, for his part, said, “May God forgive him about all these remarks.”

Addressing the PSP leader, Hariri said: “Your partners in government are the ones who incited against him and accused him of treason like they accused Rafik Hariri.”

“From now on, I will not remain silent in the face of anyone,” Hariri vowed.

With a gun to his head and probably threats to assassinate his son.... Of course he's not going to resign.

Everybody has his opinion, mine is, that we are facing a new era in Lebanon..

These threats have been on the joumblatt family for generations, he's always known it n he's never been scared. It's time to resign from this government. Druze as a sha3ib n society r not M8/resistance etc. we want to move on with the future.

Just an after thought... I'm sure this all about the election law for joumblatt. Self-preservation is an art form in Lebanon, n he is one of the most seasoned of all.

Time to do the right thing ya Jumblatt. Join the side of light. Come out of the darkness.

saad, u want to play lebanese politics..come to lebanon,u are not more precious than all lebanese politicians threatened,saad u are losing on all fronts: ur friends,ur allies, ur popularity...u cannot keep on skiing, yachting and play politics for fun:come here or leave it to somebody staying here with the people.

“From now on, I will not remain silent in the face of anyone,”
Such a big man living in France on the Saudi payroll.

If he had the guts to live in Lebanon with both his allies and ennemies he would be silent and walking with his tail between his legs like the coward and spoiled child he is!

I regret they use twitter to send each other messages... this is lame for both Waleed and Saad.

Anyway, Lebanon is a hopeless country, what is there to fight for? honor? dignity? money? or just plain power?

khalas I don't want to play with you anymore. NA!!

One of these days, the political leaders of Lebanon are going to realise that the only way forward for the country is if they sit down face to face and thrash things out.
The best way would be to place them in a Camp David environment, each with only three advisors, and not let them out until they had come up with an agreed solution to the voting system and an agreed constitution
Only then can I see Lebanon having a free, democraric and peaceful future.

Or....we simply don't vote for these politicians, and allow for a new movement of parties under a secular political system that forces politicians to work for all communities in Lebanon.

What a stupid thing to say..

Why is everyone having a go at Jumblat ,in 2008 where were M14 and their leaders when Hezb Iran attacked the Shouf Mountian, and the same guy all you pricks are rubshing, his people fought Hezb Iran and sent them back in body bags to Southern Beirut,while the rset of M14 watched the events on TV.If Jumblat is looking after his people that dosent mean he is weak ,god bless Jumblat..

agree with chouf1. you can all stick it because while Hariri fled, Junblat remained. while hariri has means, but no knowledge of how to use it, junblat is doing the best with what he's got. he has the higher national interest at heart. while the druze fought, tarik jdedi was overrun in 15 min. please... all of you, we are in this together, but dont criticise junblat for looking after the security of the jabal. he doesnt have moscow, the vatican, or the saudi kingdom. man up and so will we!

Why you even care.

We need to stop making stupid accusation against this or that person but rather be constructive with each others in order to create stability and economic opportunities in this country.

Joumblat is taking this stance as he knows that HA will repeat what happened in May 2008 against an M14 governments and wants to avoid an all scale attack from HA against M14. He fears that he and his people will pay a dear price in the process.
HA cannot allow an M14 government especially in these circumstances when Syria is weakened by the fighting.

Those that claim Jumblatt is being threatened are just stating empty accusations. Jumblatt is still openly criticizing the Syrian regime, and has done so his whole life. If the Syrian regime "control" Lebanon so much (as M14ers claim), wouldn't Jumblatt have been a target of assassination by now?

But wait, they say, as long as he is part of the political alliance, for if he wasn't, then he would've been assassinated. But he was only part of M8 for the past 2 years; what about the six years before that?

Let us not dwell into blind rhetoric. If Jumblatt does have undisclosed reasons for staying with M8 (an odd alliance to say the least), him being threatened is not the best explanation (and neither is there any proof of it).

Iran needs Hezbollah in case it is attacked by Israel..?

Hezbollah's tactics are for defensive purposes on Lebanese territory. Its military structure and weapons would be almost useless if it had to undertake activities in Iran.

And how bright, suggesting civil war. I'm sure that'll solve the problem, just like the problem is solved in Syria and in Lebanon in 1975.

Go read a bit more before you suggest other baseless and ineffective paths.

Yes unfortunately Iran needs HA in case it's attacked by Israel!!
and Hezbollah's tactics are not only for defensive purposes on Lebanese territory!

1/ 3-sept-2012:: Hassan Nasrallah: "The response To an Israeli attack, will not be just inside the Israeli entity - American bases in the whole region could be Hezbollah targets"

Akh....FT, your friends of the syrian regime stole a big chunk of the 40 billion... or maybe you deny that too...plus, the 40 billion is the debt, not the entire debt was stolen, ridiculous...