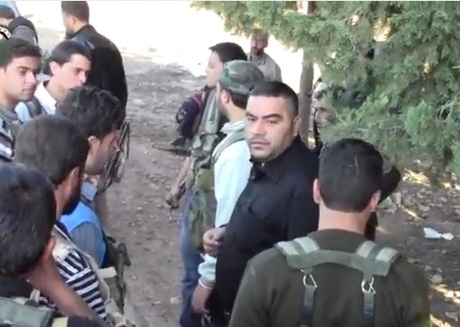 Ammar al-Dadikhi, aka Abou Ibrahim, the infamous abductor of the Lebanese pilgrims in Syria's Aazaz, has been killed during an attempt to storm a town in Aleppo's countryside, the Beirut-based, pan-Arab television al-Mayadeen reported on Monday.

“Kurdish popular committees killed Abou Ibrahim and four members of his group as they were trying to storm the town of Qastal Jindo in Aleppo's countryside,” al-Mayadeen said.

Abou Ibrahim, the head of the so-called Northern Storm Brigade, shot to notoriety in mid-summer when his group claimed responsibility for kidnapping a group of Lebanese Shiite pilgrims in Aazaz.

Anti-regime activists in Aazaz and the Syrian Observatory for Human Rights have denounced Abou Ibrahim as a criminal.

The man was reportedly wounded in a Syrian airstrike on Aazaz on August 16.

Eleven Lebanese pilgrims were kidnapped by rebels in Aazaz on May 22 as they were returning home from a pilgrimage in Iran.

The kidnappers had repeatedly linked the release of the Lebanese captives to Hizbullah chief Sayyed Hassan Nasrallah, a close ally of the Syrian regime, apologizing over his stances on the Syrian revolt.

Itani has reassured that he is in good health in a YouTube video, clarifying that he is “under house arrest.”

In a statement published on its website, the Aazaz Northern Storm Brigade said that Itani was in its custody due to security reasons.

The statement pointed out that Itani was not arrested because of his nationality or political affiliation and that he will be asked to leave Syrian territory after a few days.

Itani, who works for LBCI television and other news channels, was detained “because his work is incompatible with the path of the Syrian revolution and rebels,” the rebels posted on their page.

They pointed out that “reports and videos have not proven yet Itani's involvement with any party that works against the revolution, but his presence as a journalist no longer receives approval in areas controlled by the rebels.”

When contacted by LBCI, Abou Ibrahim confirmed that Itani is in the custody of Aazaz rebels, and that he was detained while accompanying a group of fighters in Aleppo.

“Itani was taking photos of a lot of military operations which made us suspicious and therefore we took him to Aazaz,” Abou Ibrahim said.

He is expected to be released in the next two days, it revealed.

3adel 3akse balas if the kurds get involved in the fighting 3awad besalemtak ya FSA.the kurds been sitting natural since the up rise why would u even want touch them u stupid FSA.this kurds are trained more then FSA and syrian army buy it self.yalla soon bashar will sit and release the KURDS on FSA

trust me i was born in leb originally armenian ,what i want say ive seen this guys and know very well how they been trained and prepared ,and kept on the border of turkey,from syrian side,iraqi side and iranian side,(surrounding Turkish border)everybody was trying to avoid conflict with them special TURKEY.and bashar is almost there to unleash them.i wish kurds get involve in this conflict so that uprising in syria will come to an end

He was a sectarian criminal

kidnapping people just because he can! bala raj3a

If only someone would kill all the 'resistance' kidnappers in Lebanon's east...

there weren't kurdish... they were hezbolah operatives....

My guess is that Kiserwani was being ironic and your reaction just goes to show how liberal YOU are in labeling people as "Ashraf el Nas" when they are just a TFEH!
So, the so called "theresistance", TFEH 3leik w 3ala amtalak

Long Live the Kurdish youth that rises up against thousands of years of oppucation!
Kurds in Iran are the next ones to rise up and connect all three parts of Kurdistan and lastly Turkish Kurds will join us. We are already on a move!

FSA should stay away from Kurdish areas since PYD is controlling it and have secured it violence. Or else we will release all Kurdish anger and the gerilla units from PKK against FSA. FSA wont survive a war with Kurds and Assad.

Thousands of years of opression? Really? Nice lie. Stop acting like a victim. Your anger is only released on your women who you kill like cattle. Kurds are the worst opressors of women on earth. No other people have so much hate for women as kurds do. So take your anger and shove it. Connecting all three parts of kurdistan lol, what a joke, you guys dont even share the same language or culture, how will you then be connected? Your arrogance is laughed upon. Get down from your high horse. The pkk and its likes are a bunch of terrorists. Nobody is scared of you, the turkish army takes good care of scum terrorists like the pkk.

im not KURD and neither Turk thanks god,but i want tell u my friend this Kurds in syria and iran specially the ones in iraq are trained very well over years stop saying turkey is taking care of the pkk.entire turkish army hasnt step inch in 2 pkk camps for 20 years now the funny is pkk attack and take turkish army control bases,i describe kurds like a volcano in the area.and that volcano is almost there to blow.they have roots all the way to palestenian camps,and lets not forget pkk was created by russia and trained in russia and they are controlled by russia thats why they are called terrorist

We dont share the same language? do you even know kurdish to make such conclusions? I guess not. We share the same language, just ask those linguistic professors that put our language as one whole into the indo european language tree. Or your knowledge of languages surpasses of those professors? Who is arrogant here?
My arrogance? I think you are the one being laughed at, todays kurds are not like yesterdays kurds were you can just come and do whatever you wish on us. Today we are a power in middleeast that is rising up to reclaim what is ours.
Turkish army takes care of PKK? Ask the Turkish generals why they have ordered all military movements to be done by air and not by land.
They will answer you easily. PKK have taken control over the ground.
Just check in turkish news hurriyet and search for the english version if you are about to call me a liar.

The voice of Bachar and Khameni has spoken