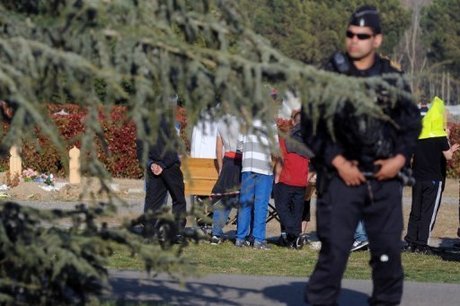 French police Tuesday unveiled a damning report that showed up several loopholes in the investigation of al-Qaida-inspired gunman Mohamed Merah before his shooting spree in Toulouse.

The 17-page report by the police disciplinary unit IGPN said "several objective failures had come to light," including a "delayed coordinated reaction," as Interior Minister Manuel Valls vowed to "rapidly put into place the necessary adjustments."

Various units of the French police and intelligence bodies were working in a compartmentalized manner, the report said, slamming the French intelligence agency DCRI, which reports directly to the interior ministry, for "identifying the change in Merah's profile very late."

Merah, a self-described al-Qaida sympathizer, shot a rabbi, three Jewish schoolchildren and three French paratroopers in attacks in and around the southern city of Toulouse in March before being shot dead in a police siege.

The report said Merah, who has had at least 15 previous criminal convictions, attacked a neighbor in June 2010 who confronted him for showing her son a video depicting decapitation.

The lack of coordination resulted in the DCRI being unaware of this development, which could have led to increased surveillance on Merah, who turned into an Islamist hardliner in prison in February 2008, it said.

Merah's transformation to a radical only became apparent to the agency two years later.

And Merah's departure to Pakistan in August last year also went unnoticed because he transited through Oman, which is not part of the 31 destinations where outbound travel is monitored by French intelligence.

It called for tighter surveillance and better coordination between the various security agencies, including fiscal policing. Merah had a rented apartment in Toulouse despite having no declared income.

Separate reports from the DCRI show that Merah was under intense surveillance throughout 2011 but that agents decided to reduce monitoring.

They show that Merah, who had been under surveillance since 2006, was identified as a "privileged target" at the beginning of last year after returning from a trip to Afghanistan, where he was detained in November 2010.

Surveillance from March to July indicated he was in regular contact with "the radical Islamist movement in Toulouse", was showing "paranoid behavior" and was receiving funds from extremists.

Merah traveled to Pakistan between August and October last year and met with DCRI agents upon his return.

President Francois Hollande has vowed to beef up its anti-terrorism laws following the killings.

Plans presented to cabinet earlier this month would allow authorities to prosecute suspects for terrorism-related crimes committed outside the country, allowing France to target extremists who attend foreign training camps.