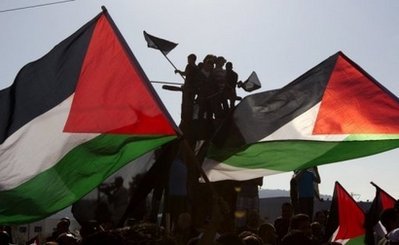 French President Francois Hollande on Wednesday urged Israel and the Palestinians to resume peace talks without any conditions, while criticizing continued Israeli occupation.

"Only negotiations can lead to a definitive solution," he said after his first direct meeting with Israeli Prime Minister Benjamin Netanyahu in Paris.

"These negotiations are hoped for and awaited."

He said the two countries had "divergences on occupation, which we want to see halted."

Direct peace talks have been on hold for more than two years, with Palestinian President Mahmoud Abbas refusing to negotiate as long as Israel continues to build and approve new Jewish settlements.

You can only make peace with your enemies. This has been proved throughout history. Jordan and Egypt have proven that compromise can lead to peace treaties. Even Lebanon in 1983 did that until they were forced to tear up the treaty by the Syrians. The Palestinians (whoever they are) whether in the West Bank or in Gaza refuse to sit down with the Israelis to talk. If Arafat has been honest during his talks with the Israelis there could have been a free and independent Palestine State more than 20 years ago.

Bla bla bla, the zionist trash gog and magog eont know what peace is so stop hijacking this world. Peace will only come when muslims have defeated israel and the anti-christ which of course you will be on his side without realizing it. Zionists have nothing to do with Palestine, and they arent even related to the ancient israelites whose identity they have hijacked. But keep posting your nonsence, the future will show you immigrated zionists how weak you were and how yoir entire foundation was based on lies and propaganda. Keep lying,your words will witness against you on the day of judgement when hellfire awaits you. Oh yeah i forgot, gog and magog jews dont believe in hell. Boy, will u be surprised.

Your line of thought is so strange. You automatically believe that evryone who mentions a word in favour of peace talks between Israel and the Arab States, or just in favour of Israel is :
1- An Israeli, 2 - A Zionist, 3 - Jewish.
Believe it or not there are other sane people in the world.

Oh, I forgot, so I am lying that in 1983 the then Lebanese Government signed a Peace Agreement with Israel, only to tear it up because of Syrian objection.
So, I am lying that Egypt and Jordan have peace treaties with Israel.
I am lying when I state that Arafat refused Israeli offers to set up an independent Palestine state in the 1980's and 1990's.
Everyone, except you, know the correct answer to these three statements, so it seems that it is you who is lying (to yourself as well) not me.