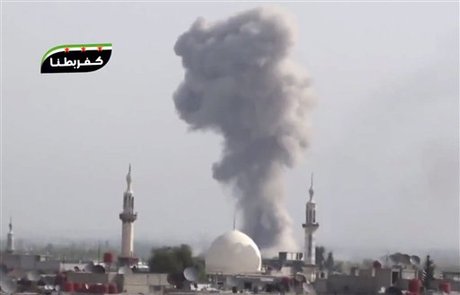 Syrian rebels killed 28 soldiers in attacks on three army checkpoints on the main road from Damascus to the embattled city of Aleppo Thursday, a watchdog said, as a warplane bombed the outskirts of the rebel-held town of Harasta, east of Damascus.

Five rebels were also killed in the attacks near the city of Saraqeb in Syria's northwest, the Britain-based Syrian Observatory for Human Rights said.

The rebels did not capture the checkpoints, where they would be exposed to regime air strikes, but did seize several armored vehicles, said the Observatory.

Syria's northwestern Idlib province has become a key battleground in the country's conflict, especially after rebel forces seized the town of Maaret al-Numan on the Damascus-Aleppo road early last month.

Fighting has since raged at the Wadi Deif army base near Maaret al-Numan, where rebel forces have laid siege to regime troops.

The air force also bombarded towns in the northwestern province of Idlib, much of which is under rebel control, said observatory.

The violence came a day after at least 152 people were killed across Syria -- 58 civilians, 48 rebels and 46 soldiers, said the Observatory.

"Warplanes dropped three bombs on the outskirts of Harasta" in the Eastern Ghuta area home to some of the rebel Free Syrian Army's best organized and fiercest fighters, it said.

Monday saw the regime carry out its heaviest air strikes since air power was first deployed in mid-summer, and intensive aerial attacks have continued, says the Observatory.

The surge in air raids -- often with the crudest kind of explosives -- is a desperate attempt by the regime to reverse rebel gains and turn populations against them, analysts and rebels say.

On Thursday, fighter jets struck the towns of Talmanas and Maar Shamarin in Idlib province, said the Observatory.

The jihadist al-Nusra Front joined the rebels in clashes near the province's biggest army base at Wadi Daif, a barracks and storehouse for arms and fuel that they have laid siege to since early October.

Meanwhile, several people were injured when helicopters pounded the district of al-Hajar al-Aswad in southern Damascus, said the Observatory.

"One of the shells on al-Hajar al-Aswad... fell into the neighborhood's sports center," it said.

The contested neighborhood of al-Hajar al-Aswad was scene of intense mid-summer fighting between rebels and the army.

Elsewhere, clashes broke out in the northern city of Aleppo as the army shelled the rebel-held district of Sukari during the night, the Observatory said, without providing details on casualties.

More than 36,000 people, the majority civilians, have been killed in Syria since the uprising against Bashar Assad's regime broke out in March 2011, according to the Britain-based monitor.

where and how the f did you come up with 'while the surrendered', teslamli ma azkak.

It's not rair for the strong Syrian army to face civilians fighting back,. This is not what they were trained for !

it's only a matter of time before the battles move to beka3. I'll give it to summer 2013. Thanks to arrogants like nasrala and idiots like his blind followers.