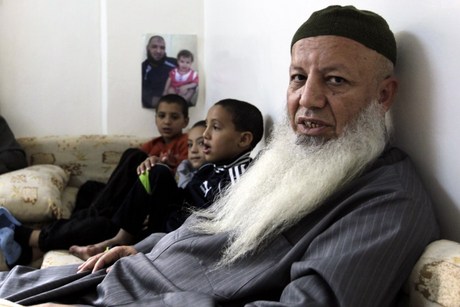 The widow and children of Salafist Mahmoud Abdelal, who blew himself up in Syria last month, were all ears as his proud but grieving mother described his commitment to jihad.

His story is particularly timely, given that U.S. Secretary of State Hillary Clinton urged the Syrian opposition on Wednesday to resist efforts by Islamist "extremists" to hijack the revolution to oust President Bashar Assad.

Four boys and a girl, the oldest only 10, gathered around their mother, Khadijah Tahawi in a humble house in one of the most underprivileged parts of Baqaa, Jordan's largest Palestinian refugee camp north of Amman.

Hind Hassan, 50, pulled herself together as she spoke of Mahmoud, one of scores of Jordanian Salafists said to have gone to neighboring Syria to fight, with at least 13 reportedly killed.

"My son was very very religious. He started reciting the Koran when he was 10. He never stopped dreaming of jihad," Hind told Agence France Presse as of one of the children cried.

After graduating from a vocational training center in Amman, he became a successful mechanic.

"I prevented him so many times from going to the West Bank to fight Israel," Hindi said of her son, 33, who is a Jordanian of Palestinian origin.

And so did the authorities. He was arrested in 2004 and held for a month after he tried to go to the West Bank to fight.

In 2005, he was jailed for two years for plotting to fight U.S. troops in Iraq.

Then, in 2009, he was convicted in absentia of plotting to attack and kidnap intelligence officers in Jordan and sentenced to 25 years in jail.

"He remained on the run after that and visited us secretly. The last time I saw him was in September.

"He told me: 'God is on my side but please pray for me.' He kissed his wife and children and left," said Hind as she burst into tears.

"He sounded happy over the telephone, but he said: 'If I do not call again, do not worry and keep praying for me.'"

"I missed him and I kept waiting for him to call but he never did. I knew that he was martyred."

On October 12, Mahmoud's father Mohammed told Hind someone had called from Syria and that their son had died in a suicide attack on a post of army snipers in Daraa, the cradle of the uprising.

"I was told he blew himself up wearing an explosive belt. I wished to see some of his remains at least. I am happy that God gave him what he wanted and relieved him from injustice in this life," said the woman.

"But at the same time, it broke my heart. I feel sad because I am a mother and he is my son."

Mahmoud's widow Khadijah, only 26 years old, said as she wept: "I knew that he would do it. We were so happy together. I miss him a lot."

Salafists, who espouse an austere form of Sunni Islam, call funerals for their number killed in fighting a "martyr's wedding", and exchange congratulations instead of condolences.

"More than 1,000 people attended my son's martyr's wedding," Hind said. "I hope he is happy now that God made his dream come true."

"I think Mahmoud was preparing all of us for his martyrdom. We argued about jihad and suicide operations. I begged him to avoid them," Khadijah told AFP, holding her youngest child.

"But he never needed anybody's permission. He always said: 'It is like a little sting, you do not feel it as long as you have faith in God.'

Mahmoud's father-in-law is Abed Shehadeh, known as Abu Mohammad Tahawi, one of the top Salafist leaders in Jordan.

Tahawi said more than 250 Jordanian jihadists are now in Syria to fight and that 13 others have been killed there.

One of Mahmoud's friends, who asked not to be named, described him as "tall, athletic and well-built. He boxed and did bodybuilding. But at the same time he was very friendly."

"After he joined the Salafist movement, he isolated himself and became less sociable. But he was tolerant to others, including non-Salafists."

Tahawi said he was proud to be fighting the Syrian regime.

"Mahmoud was martyred fighting the brutal regime in Syria that has spread fear and death among Sunni Muslims. Fighting this regime makes us rejoice and makes us proud," he told AFP.

"Jihad against the regime of Assad is the duty of every Muslim, because he killed people and violated their honor and destroyed their homes. He is waging a war against the people of Syria."

On Wednesday, Clinton raised the alarm about jihadists in Syria.

"There are disturbing reports of extremists going into Syria attempting to take over what has been a legitimate revolution against an oppressive regime for their own purposes," Clinton said during a visit to Croatia.

The opposition should "strongly resist the efforts by the extremists to hijack the Syrian revolution".

Jordan, which says it is hosting more than 200,000 Syrian refugees, arrested more than a dozen jihadists in April and June as they tried to infiltrate Syria.

And last month, although Amman has beefed up its security along the border, a Jordanian soldier was killed in clashes with jihadists trying to cross over.

"Mark my word, all the Salafists in the world will stand by the Syrian people. We will hit the Syrian regime so hard and we do not care if the world considers this as a crime," Tahawi said.

The Mother,wife,father and friends are all happy and proud because God granted him his dream " suicide bombing in holy jihad". What else can you say apart from evil is well and truly active on earth.

Any society in which a mother can be proud of her son killing himself in a suicide bombing should itself be condemned by the whole civilized world.

what 'civilized' world? the US did not apologize for nuking japan up to this day, not one bomb but two! the 'civilized' world is in great part responsible for what is happening in Syria, what do you expect the syrian people to do? who would they turn to? If you suybject toronto ontario to two years of mig jets, rape, destruction you will see christian fundamentalism flourish there as well, this is a scientific fact about human beings.

Yes and we have seen this evil clearly from the christian rapists and murderer terrorists.

Given the current course of HA involvement in Syria and the level of injustice/opression it is subjecting the lebanese to, we might very well start seeing those suiciders in the streets of beirut. At the end of the day how far is Syria from lebanon? and just imagine what few thousand fighters with extreme grudges crossing over would do. The only way to avert such an outcome is for the she3a community to make peace with the suni one (which is becoming more fertile by the day for revenge). Given the total HA indifference and the assasinations etc. i think the probablity of the worse to come is actualy quite high.

religion of peace ya chabab

all religions are feritales, and when you subject any community to extreme opression then fundamentalism is a natural product, this is not exclusive to islam at all.

let us just hope and pray that there is enough wisdom in the she3a community in lebanon to prevent lebanon from becoming the battle ground of extremism. Given the current course of arrogance and false feelings of invincibility the probablity of such outcome is very high.

Keep telling yourself that. Muslims in KSA are not oppressed yet they make up the bulwark of the world's jihadists. This mujahid was from JOrdan, not even Syria. He joined jihad in 3 different countries. He was a terrorist and he got what he deserved, he probably took many infidel fellow Muslims with him when he blew himself into paradise, however.

i dont see the problem.. win-win

These are your allies, are they not? Only in Lebanon do liberals in M14 ally with Salafi terrorists

first time i agree with karim.

Everybody seems to be missing the point here,

*yes USA nuked Japan but why? Because of what the Japs did in pearl harbour.
* yes the serbs commited atrocities, Milosovic and Kradic were nothing short of evil, the bishops that are raping children are nothing short of evil, but the fudemental difference here is what they did was a personal evil decision and does not stem from the Bible, Christianity preaches love and peace, unlike the Koran where jihad is the ultimate honour any muslim could achieve

"Christianity preaches love and peace, unlike the Koran where jihad is the ultimate honour any muslim could achieve"

your summary of these two religions is a little narrowminded don t you think?
if christianity was all about love and peace (it is indeed) but what about the centuries the church spent killing numerous civilizations in the name of Jesus! they committed genocides, don t forget! they were for centuries an intolerant religion!
if islam was just about jihad, what about the centuries of culture and philosophy it brought to the world! europe was built on the garbage of islam said a historian. without islam and its flourishing culture no progress would have been made in europe in the middle ages...

so these are two counter examples of what you say, just for you not to jump to easy conclusions and see how much more complex things are!

Use your loaf dude,as I mentioned above its some evil Christians and not Christianity itself no evil is found in the gospel.