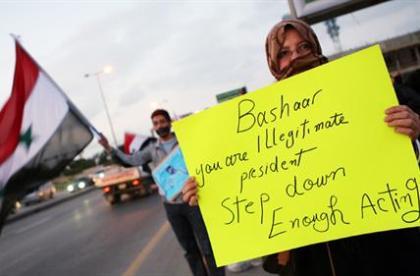 The U.S. on Friday imposed new sanctions on Syria over its violent repression of protests, and again singled out Iran's Revolutionary Guard, which it said was aiding the crackdown, as the EU agreed to impose an arms embargo against Damascus.

Also named in an executive order signed by President Barack Obama were Ali Mamlouk, director of Syria's Intelligence Directorate, and Atif Najib, the ex-head of intelligence in Daraa province, the epicenter of political violence.

The Syrian intelligence directorate as a whole was also targeted by the sanctions, which come after U.S. calls for restraint in Syria went unheeded and as Obama came under increased pressure for a more robust response.

"The United States strongly condemns the Syrian government's continued use of violence and intimidation against the Syrian people," the White House said in a statement.

"We call upon the Syrian regime and its supporters to refrain from further acts of violence and other human rights abuses against Syrian citizens seeking to express their political aspirations."

The statement also singled out Iran's Revolutionary Guards, saying the Corps was acting as a conduit for material support for the Syrian government which was helping it enforce the crackdown.

"Iran's actions in support of the Syrian regime place it in stark opposition to the will of the Syrian people," the White House said.

The Revolutionary Guards have previously been sanctioned by Washington for providing support to "terrorism."

The new measures block any property in the United States or in the possession or control of Americans belonging to the named individuals and entities and prevents them entering transactions with U.S. individuals.

The sanctions were unveiled as tens of thousands of protesters poured onto the streets across Syria following a call for a "day of rage" against the Assad government after weekly Muslim prayers.

Meanwhile, diplomats told Agence France Presse the European Union agreed in principle Friday to impose an arms embargo against Syria and prepare additional measures to punish the regime for the bloody crackdown against protests.

EU ambassadors meeting in Brussels decided to launch preparations for an embargo on the sale of weapons and equipment that might be used for internal repression, a European diplomat told AFP.

Other measures could include an assets freeze and travel bans against officials blamed for the violent repression of anti-government protests.

The EU envoys tasked experts to draw up the sanctions, a procedure that can take place quickly, the diplomats said.

Earlier, the 47-nation U.N. Human Rights Council voted for a revised U.S.-led resolution on the crackdown in Syria that asked the U.N. rights chief to send an investigative mission to the country.

The resolution also "unequivocally condemns the use of lethal violence against peaceful protestors by the Syrian authorities ... and urges the Syrian government to immediately put an end to all human rights violations."

It also "requests the office of the High Commissioner for Human Rights to urgently dispatch a mission to the Syrian Arab Republic to investigate all alleged violations of international human rights law," according to the text released by the United Nations.

Seven countries abstained, while five were absent at the time of the vote, including Bahrain, Jordan and Qatar.

At least 55 people including 48 civilians were killed in Syria on Friday as security forces clashed with protesters defying the crackdown in the restive cities of Daraa, Homs and Latakia, a human rights group said.

The Syrian Observatory for Human Rights (SOHR) told AFP 32 civilians were killed in the southern town of Daraa, 15 in the industrial city of Homs and one in the northwestern coastal city of Latakia.