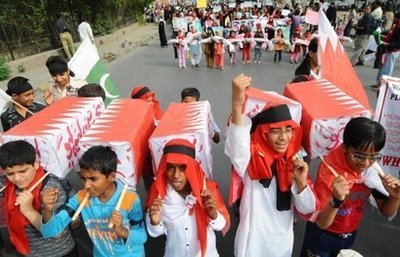 Bahraini authorities have arrested two former MPs from the al-Wefaq Shiite main opposition group, in a continued crackdown on the kingdom's Shiite majority, a member of the organization told Agence France Presse on Tuesday.

He said some 20 masked gunmen in plainclothes stormed the house of Fayruz in Hamad Town, and took him away after searching the building.

Matar was taken from his home in the village of Deih west of Manama, he added.

"We do not have any information about them" said Mousawi, adding that Fayruz's family went to a police station and reported that masked gunmen had taken him away.

"We do not know why the two (former) MPs have been arrested... It is strange that they have arrested them this way when they could have summoned them normally," he said.

Matar had continued to condemn via the foreign media Bahrain's heavy-handed clampdown on Shiites after the quashing of a month-long pro-democracy protest dominated by the Muslim sect.

Bahrain has come under strong criticism from international rights' groups after it quashed the protest in mid-March and hunted Shiite protesters in their villages.

Many were said to have been dismissed from their jobs for taking part in the protests.

Authorities in the kingdom ruled by the Sunni al-Khalifa dynasty have said that 24 people were killed during the unrest, most of them demonstrators.

Last week, four Shiites were sentenced to death and three others were jailed for life by a military court for the alleged killing of two security men.

Last week, a Bahraini official said 405 detainees had been referred to military courts while 312 have been released.

"Sixty-two criminal cases and 343 misdemeanor cases have been referred to the courts of national safety," said the head of the Information Affairs Authority, Sheikh Fawaz bin Mohammed al-Khalifa.