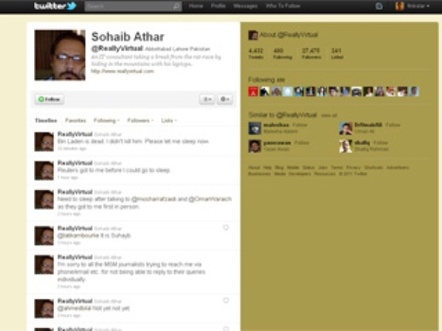 An IT consultant who hoped for a quiet life in a summer resort town in Pakistan has become an Internet sensation as the first to report the attack on the world's most wanted man.

Sohaib Athar was just another witty voice on micro-blogging site Twitter until he heard the sound of helicopters near his home in a Abbottabad, 30 miles (50 kilometers) north of Islamabad early Monday.

But Athar is now world famous with almost 90,000 Twitter "followers" -- users who keep track of his messages -- as the first person to record the attack on Osama bin Laden's secret hideaway.

He was swamped with emails and interview requests from media around the globe and his blog was even attacked by Internet hackers.

"Bin Laden is dead. I didn't kill him. Please let me sleep now," he wrote on Twitter after the story went around the world.

It began with a tweet in the early hours of Monday morning.

"Helicopter hovering above Abbottabad at 1AM (is a rare event)," followed by another; "Go away helicopter before I take out my giant swatter."

As he explained on his Twitter feed, he was simply an IT consultant looking for a quiet life by "taking a break from the rat-race by hiding in the mountains" with his laptops.

Little did he know it, but he was the only real-time reporter to the U.S. military finally getting their man, the world's most wanted terrorist -- Osama bin Laden.

"A huge window shaking bang here in Abbottabad Cantt. I hope its not the start of something nasty," he tweeted under his Twitter name "ReallyVirtual" during the attack by U.S. special forces.

"All silent after the blast, but a friend heard it 6 km away too... the helicopter is gone too," he wrote later.

"Seems like my giant swatter worked," he joked, pasting a link to a news story about a helicopter crash.

Then it started to become clear that something extraordinary was happening "the few people online at this time of the night are saying one of the copters was not Pakistani..."

But there was still no clue it was linked to an attack on the Al Qaeda founder.

"Funny, moving to Abbottabad was part of the 'being safe' strategy," he joked and soon offered a link to the location of the attack near to a Pakistani military base.

He even offered a slice of personal analysis of the situation worthy of any CNN pundit: "Since taliban (probably) don't have helicopters, and since they're saying it was not "ours", so must be a complicated situation."

Later one of Athar's followers was the first to link the crash with news that the U.S. president was planning to address the nation: "I think the helicopter crash in Abbottabad, Pakistan and the President Obama breaking news address are connected."

Athar then realized he had been the first with news of the attack.

"Osama Bin Laden killed in Abbottabad, Pakistan.: ISI has confirmed it << Uh oh, there goes the neighborhood," he joked.

"Uh oh, now I'm the guy who live-blogged the Osama raid without knowing it."

As Athar explains on his website, www.reallyvirtual.com, he is "a 33 year old guy from Lahore, Pakistan. He has 18 years of programming experience and seven years of parenting experience".

But he was not seeking to bask in the limelight, turning down or not responding to most interview requests from the media, including one from Agence France Presse.