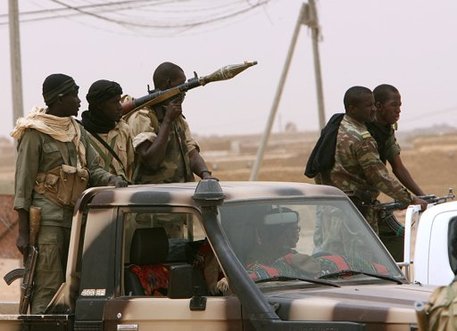 Mauritania warned Monday that the fallout from a military strike against the Islamist extremists controlling northern Mali could be devastating and affect the troubled country's neighbors.

"This country which has for a long time been seen as a model of democracy is like a volcano about to erupt," national assembly president Messaoud Ould Boulkheir said a day after West African leaders gave the green light to sending 3,300 troops to northern Mali to wrest control from the Islamists.

"If this volcano awakens, it will dump incandescent ashes over its neighbors," he told parliament.

"As we share a common border and since the interests of our peoples are closely interwoven, our country cannot just stand by," he added.

Following Sunday's summit of West African leaders in the Nigerian capital Abuja, experts cautioned that military intervention would still be months away.

Leaders from the 15-nation Economic Community of West African States (ECOWAS) met at the summit to set out a blueprint for military action in Mali's north, but would not rule out dialogue to resolve the crisis -- even though they said force might be necessary given the extremist threat.

Mali rapidly imploded after a coup in Bamako in March allowed Tuareg desert nomads, who had relaunched a decades-old rebellion for independence, to seize the main towns in the north with the help of Islamist allies.

The secular separatists were quickly sidelined by the Islamists, who had little interest in their aspirations for an independent homeland and set about implementing their version of strict Islamic law, meting out punishments including public stoning and floggings and destroying World Heritage sites they considered idolatrous.

Transitional authorities in the Malian capital Bamako waited until September to call for outside help to retake the territory, with leaders like Burkina Faso's President Blaise Compaore, West Africa's lead mediator in the crisis, favoring dialogue, and others like Niger's Mahamadou Issoufou the use of force.

-- Rebuilding the army a major challenge --

"There has been a lot of progress these past weeks in terms of international coherence but we're certainly not on the eve of a (military) intervention," even after getting the necessary green light from the United Nations, warned Gilles Yabi of the International Crisis Group (ICG) in Dakar.

Yabi, who expects a military strike in the second half of 2013, doubted that "all details have been finalized" for a military intervention, even if on "the political level and as far as principles are concerned there are no longer any major differences".

"Rebuilding the Malian army is a major challenge (and) that also will take time," he added.

The exact number of men to be sent by ECOWAS, their training level, the force's military means and capability are still to be set and financing issues also remain.

But terrorism expert Jean-Charles Brisard warned of a looming quagmire and favored "a massive and quick offensive".

The Abuja summit stressed on Sunday that dialogue should be pursued with the northern Mali groups that renounce "terrorism" and Mali's partition. Talks mediated by Burkina Faso have already begun with Islamist group Ansar Dine, which is dominated by Malian Tuaregs.

"We gave negotiations a chance to avoid the worst," Ansar Dine's head delegate, Algabass Ag Intalla, told AFP, while saying he feared that ECOWAS may not have the will to talk.

But Brisard warned: "Everything is currently focused on Ansar Dine, but in reality it's a bait laid by al-Qaida in the Islamic Maghreb (AQIM)," the North African branch of al-Qaida.

"The political solution is a bait. There is a security issue that must be solved without political precondition. The jihadists must lay down their arms."

Regional powerhouse Algeria meanwhile renewed its call for a political solution to the Mali crisis.

"We have not stopped emphasizing that a way out of the crisis, through dialogue between the Malian authorities and the rebel groups in the north, is completely possible," foreign ministry spokesman Amar Belani told AFP.

Belani referred to the "shared willingness to give a chance to peace through dialogue", expressed by ECOWAS.

"We believe that the discussions currently taking place with the rebel groups allow us to envisage a viable political solution that respects the sovereignty, unity and integrity of Mali," he said.