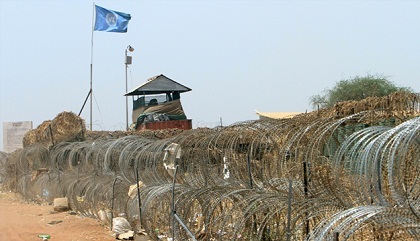 The U.N. Security Council on Friday called on Sudan and South Sudan to step up efforts to end their wrangling over a disputed territory wracked by protests this week.

A council resolution renewing the mandate of a U.N. peacekeeping force in Abyei demanded that the rival neighbors "urgently" agree nominations for a government for the territory and set up a police force.

Abyei is one of the key territorial disputes left after Sudan and South Sudan split acrimoniously in July 2011.

Most of the local population are ethnic Dinka but nomadic Arab Misseriya maintain a strong presence. U.N. troops this week shot and killed a worker for the U.N. mission who had joined a tribal dispute, residents said.

Sudan overran Abyei last year and tens of thousands of people fled into South Sudan. It has since withdrawn most of its forces, but the Security Council resolution again demanded that Sudan pull its specialized police protecting oil facilities out of Abyei.

There is a force of almost 4,000 Ethiopian U.N. troops in Abyei and their mandate was extended until May 31.

Envoys from the two nations welcomed moves to ease tensions while hinting at differences over their claim to sovereignty.

A "unilateral accord" would "not achieve the security and stability in the region which is our most important objective," said Sudan's U.N. ambassador Daffa-Alla Elhag Ali Osman.

An accord would be "a crucial component of the lasting peace and stability that we all seek in our region," said South Sudan's U.N. envoy Francis Deng.