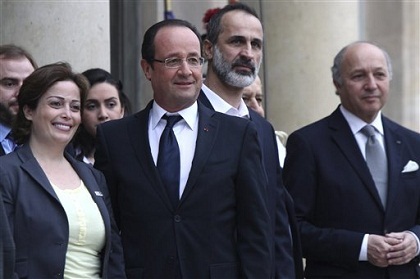 Syria's new opposition coalition signaled Saturday that it intends to move quickly to establish a broad-based alternative government to the regime of President Bashar Assad.

After talks with French President Francois Hollande, coalition leader Ahmed Moaz al-Khatib assured the international community that the transitional government will be composed of technocrats rather than politicians, and include representatives of all the war-torn country's ethnic and religious groups.

But Khatib appeared to have made little progress on his call for the West to arm the rebels with Hollande indicating that the major powers remain cautious about such a step.

"There is no problem. The coalition exists and we will launch a call for candidates to form a government of technocrats that will work until the regime falls," Khatib told reporters after the talks in Paris.

France, which on Tuesday became the first Western state to recognize the coalition as the sole representative of the Syrian people, is pushing for the rebels to be given greater support, including some arms.

"I can't hide the importance of this question," Hollande said, while acknowledging that France could not act without agreement from its partners in the European Union, which currently has a strict embargo on arms deliveries to Syria.

"The (rebel) Syrians need military means but the international community also has to exercise control," he said.

Hollande also said that France would increase its recognition of the National Coalition by allowing them to appoint an ambassador in Paris.

Monzir Makhous, an academic, is to fill the post, although it was unclear if this would happen before the transitional government is formed.

EU foreign ministers are set to discuss the arms embargo at talks in Brussels on Monday. France's Laurent Fabius said Thursday he would raise the idea of modifying the current EU embargo to exclude defensive weapons for the rebels to help them protect areas they hold from bombardment by forces loyal to Assad.

"The protection of liberated zones can only be done in the framework of the international community," Hollande said.

"Once an alternative government has been formed it can itself legitimately call for protection and support."

Hollande noted that Khatib, a Sunni imam, had assured him that the future government would include Christians and Alawites, the minority group to which Assad belongs.

France, Turkey and the Gulf states have so far granted official recognition to the new Syrian grouping, and British Foreign Secretary William Hague, who met Khatib in London on Friday, said Britain was considering following suit.

EU member states Germany, Spain, Italy and Poland have also welcomed the formation of the National Coalition, but have stopped short of recognizing it as the sole representative of the Syrian people.

Cool for him... Personally, I find Hollande tasteless... zero charisma. Sarko was already an all times low, yet the Frenchies managed to go lower.

Back to the subject, this is promising for the resistance. Good luck to them.