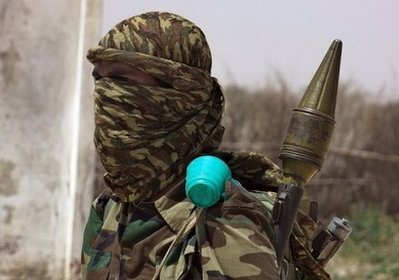 Al-Qaida in the Islamic Maghreb (AQIM) and its allies initially fought alongside the nomadic Tuareg people's Azawad National Liberation Movement (MNLA) to seize control of Mali's vast desert north in the wake of a March 22 military coup.

But the radical Islamists, whose goals include imposing strict Islamic law, or sharia, soon turned on their more secular Tuareg allies, who are fighting to establish an independent state.

Though the dusty town of Gao and its surroundings were initially under the control of the Tuareg MNLA, the Movement for Oneness and Jihad in West Africa (MUJAO) ousted them at the end of June.

On Friday, the MNLA attacked the Islamist fighters but suffered a heavy defeat that saw about a dozen of their men killed, regional security sources said.

The MNLA said Saturday it had suffered only nine injuries among its fighters while killing more than 20 MUJAO fighters and wounding "several dozen" more.

"We are delighted with this first success," the MNLA said in a statement, as the region remained tense waiting to see if the Tuareg rebels would regroup for a fresh assault.

To prepare for a possible new offensive, AQIM sent about 300 reinforcements from Timbuktu, about 300 kilometers (185 miles) west of Gao, witnesses told AFP.

According to Moussa Salem, an MNLA fighter, "our goal remains to retake Azawad from the hands of AQIM and its allies. We can fall back, but it's only to be able to better push forwards after."

Azawad is the Tuareg name for northern Mali.

MUJAO spokesman Walid Abu Sahraoui said his group would continue to pursue the MNLA across the entire region.

"We are in control of the situation," he said.

Since their defeat at the hands of the radical Islamists on June 27, the Tuaregs have no longer controlled any town in this massive desert region that is larger than Texas and spans two-thirds of Mali's territory.

In the regions under their control, Islamist groups have implemented sharia law and carried out brutal punishments, stoning to death an unmarried couple and amputating hands and feet from accused thieves.

Mali, once considered one of the most stable democracies in West Africa, rapidly imploded after the March coup that overthrew the government of former president Amadou Toumani Toure.

The ensuing power vacuum allowed the Tuareg, who had recently relaunched a decades-old rebellion for independence, to seize the main towns in the north with the help of their then-allies AQIM, MUJAO and Ansar Dine (Defenders of the Faith).

The Economic Community of West African States (ECOWAS) has agreed on a plan to send 3,300 troops into Mali to reclaim the north. The plan must go before the U.N. Security Council by the end of the month.

Mali's neighbor Burkina Faso has meanwhile renewed efforts to find a negotiated solution to the crisis, hosting talks with a delegation of Ansar Dine Islamists who have shown signs of breaking with the hardline jihadism of AQIM and MUJAO.

Ansar Dine and the MNLA jointly announced Friday that they were prepared to hold peace talks with Mali's interim government.

Lool seriously tho. I'm guessing it's a large area with a very small amount of ppl in it. The only reason the west cares is because if those 24 soldiers r jihadist they will let al Qaida train n plan attacks.