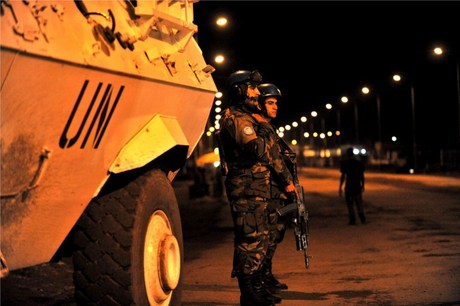 U.N. peacekeepers deployed attack helicopters in eastern Democratic Republic of Congo Saturday to support the country's army in fresh clashes with rebels, as the Security Council prepared for an emergency session on the crisis.

France said it had called the meeting of the 15-nation Security Council for 3:00 pm (2000 GMT) to address the violence, which Kinshasa said was being sponsored by neighboring Rwanda.

Earlier Saturday, fresh fighting broke out between DR Congo troops and the M23 rebels near a displaced persons' camp in North Kivu, the volatile eastern province that borders Rwanda and Uganda.

It was just the latest clash between the army and the rebels of the M23 group, composed of ethnic Tutsi army mutineers, this week.

Each side blamed the other for the latest violence, which has forced more than 7,000 people to flee to the Kanyarucinya displaced persons' camp some 10 kilometers (six miles) outside provincial capital Goma.

A statement from the U.N.'s peacekeeping mission, MONUSCO, said M23 rebels had launched an offensive with heavy weapons early Saturday.

It said it had deployed its peacekeepers as part of its mandate was to protect civilians.

"As part of this, 10 missions were carried out by (MONUSCO) attack helicopters," the statement said.

"MONUSCO firmly condemns the renewal of hostilities. It calls on the M23 to immediately halt its attacks, which have caused a deterioration of the already fragile security and humanitarian situation," it added.

"MONUSCO is following the situation closely and will not tolerate any advance or action by M23 troops which would provoke panic in the civilian population."

The attack helicopters, provided by Ukraine, were put on standby Friday after the M23 attacked the army just north of Goma.

MONUSCO said the latest fighting was taking place between the towns of Kibumba and Kibati, about five kilometers from the Kanyarucinya displaced persons' camp.

The clashes were the most serious in the rebellion since July, when U.N. attack helicopters were last put into action against the M23.

U.N. experts have said Rwanda and Uganda back the rebels, a charge fiercely denied by both countries.

U.N. Secretary General Ban Ki-moon said in a recent report that the M23 posed a long-term threat to the DR Congo government.

"Reprisal attacks on civilians are intensifying, fueling cycles of hatred and violence among different communities," he warned.

Ban also said, without naming any countries, that he was "disturbed by continuing reports of external support to the M23."

A spokesman for the DR Congo army also said Saturday that the M23 were getting help from Rwanda.

"M23 fighters have received support from Rwanda. I was at the front line myself, and the shots came from Rwanda," Olivier Hamuli, army spokesman in North Kivu province, told AFP.

"All night, a (Rwandan) military presence has been reinforced around the border. And when our combat tanks come to shell M23 positions, they are coming under fire... from Rwanda," he added.

Government spokesman Lambert Mende said the latest fighting had erupted "after a long artillery preparation coming from Rwandan territory", and that 4,000 men in columns had then descended on DR Congo territory from Rwanda.

The Rwandan army (RDF) denied involvement in the fighting.

"There are no RDF soldiers" in DR Congo, spokesman Joseph Nzabamwita told AFP. "Every time the (DR Congo army) get beaten on the ground, they use the RDF as an excuse."

As the fighting raged Saturday, some 50 soldiers' wives burned tyres on one of Goma's main streets to protest the violence, witnesses said.

"They burned tyres on the road to protest against the rebels' advance, which has caused the death of some of their husbands," said Fiston Misona, who was at the demonstration.