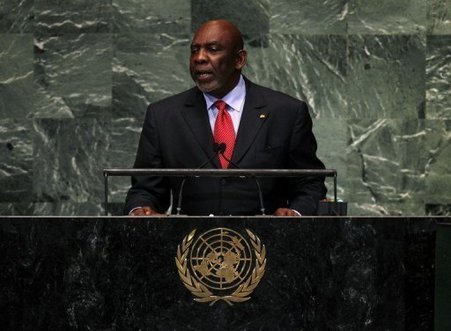 Malian Prime Minister Cheick Modibo Diarra said Sunday that the government would eventually hold talks with two northern rebel groups, the Islamist Ansar Dine and the Tuareg MNLA, because they are both homegrown movements.

Mali's desert north has been under the control of rebel groups since shortly after a March 22 coup, but the two other groups that have seized the region, Islamist rebel movements Al-Qaida in the Islamic Maghreb (AQIM) and the Movement for Oneness and Jihad in West Africa (MUJAO), are both made up mainly of foreign fighters.

Homegrown Islamist group Ansar Dine (Defenders of Faith) and the ethnic Tuareg separatist group MNLA announced Friday that they were ready for talks with Bamako after meeting Compaore.

Diarra said he hoped conditions for dialogue would be met "as quickly as possible", but stopped short of proposing a timetable.

He said talks would not address "terrorists and drug traffickers (who) for the most part are not Malian citizens".

The new push for dialogue comes after the Economic Community of West African States (ECOWAS) agreed on a plan to send 3,300 troops into Mali to reclaim the north. The plan must go before the U.N. Security Council by the end of the month.

Ansar Dine last week made important concessions, including backtracking from an earlier demand to see strict Islamic law, or sharia, imposed across all of Mali, saying instead it should only be implemented in the Kidal region it currently controls.